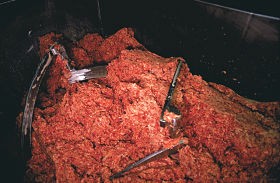 Raw beef manufacturing trim is the main component in most commercial ground beef. E. coli is the bacteria that makes you really, really sick. Repercussions for manufacturers caught distributing contaminated ground beef will be harsh: recall and destruction.

Previously, the USDA was only on the lookout for one strain of E. coli, serogroup O157:H7, which it's been patrolling since 1994. However, the agency has since discovered that there are other strains responsible for just as many illnesses, mostly in the group known as Shiga-toxin producing E. coli, or STEC.

In other words, these six strains of E. coli were responsible for approximately 100,000 illnesses each year before the USDA launched its counterattack.