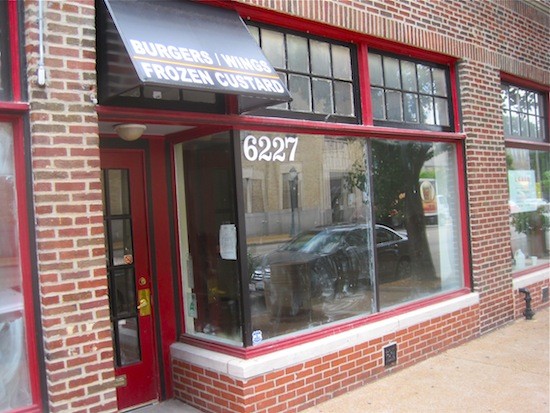 Catching up on some more restaurant news from when I was out of town the past week:

- Ligaya Figueras of Sauce spotted a new venture right in the back yard of Gut Check International Headquarters: An awning outside of 6227 Delmar Boulevard advertises a restaurant serving burgers, wings and frozen custard.

A Gut Check operative tells me that the restaurant will be called Chubbies'. Work is underway inside the storefront (which has previously been home to a sandwich shop and a restaurant-slash-hookah bar), thought it looks like a few months' more work is necessary.

- Evan Benn of the Post-Dispatch has the story of the eviction that wasn't at The Jumpin' Jupiter (7376 Manchester Road, Maplewood; 314-645-5867). After a final notice to vacate was posted outside the Maplewood nightspot, Benn reports that the Jumpin' Jupiter and its landlords are working on agreement to keep the venue in place.

- And now some news from the Metro East: George Mahe of St. Louis Magazine reports that Coyotes Ranch Grill & Saloon (4 Center Club Court, Edwardsville, Illinois; 618-659-9866) has closed at least temporarily not even two months after it opened. On its Facebook page, the restaurant posted the following explanation:

We have not yet shut our doors for good. We are closed for the time being to reconstruct and reorganize many things in the restaurant. Our plan is to reopen in June.