Market Grill to Close June 9 -- A Sad Day in Soulard 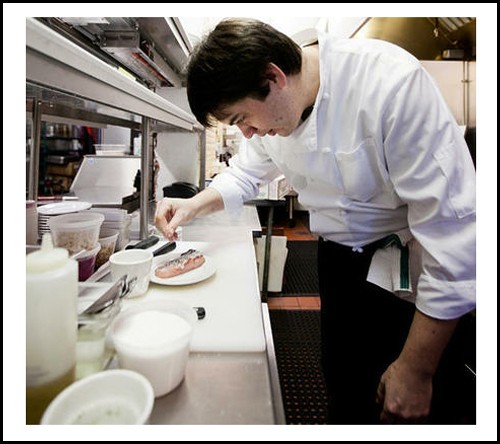 "I thought I would let you guys know before rumor hits the street that we are closing the restaurant," Shanahan writes in an e-mail addressed to RFT restaurant critic Ian Froeb and Froeb's counterpart at St. Louis magazine, George Mahe.

"There is really no simple way to list a reason. [Chef Jonathan Olson and I] walked into an existing restaurant with limited funds for advertising, etc., nine months ago knowing we were taking a huge risk. Everyone put everything they had into it but I guess time wasn't on our side. I am extremely appreciative that Jon was willing to take this risk with us. Wherever he lands next is lucky to have him and his food.

"Thank you both for helping us try and get the word out about what we were doing. Doors will be closing June 9."

When Froeb reviewed Market Grill this past December, he wrote that the arrival of Olson and Shanahan had breathed new life into what had been a lackluster location whose signature dish had been "pork wings."

The new chef is Jonathan Olson, a veteran of several local kitchens, including Erato on Main in Edwardsville, Illinois, and (briefly) the Terrace View. Many area chefs espouse the "local is better" ethos, but few are as dedicated to it as Olson, who not only seems to know every little family farm in southern Illinois, but who also serves food that he has grown or foraged himself. He brings this passion for local, seasonal produce to Market Grill -- though he is the first to admit that this alone isn't enough to make the restaurant succeed, especially given its Soulard address.

"It's one of the things we struggle with," he says. "We need to be approachable. I don't want somebody to come in and think: 'It's too expensive.' We've had to find a balance between more ambitious entrées and more approachable food."

Froeb chose Olson's porchetta sandwich as one of his Top 10 Dishes of 2011, writing:

Porchetta is a famously indulgent pork dish, and Olson doesn't hold back on the fat, wrapping a boned-out pork shoulder in pork belly and then slowly roasting it. But rather than make this the centerpiece of an entrée, he piles slices of the tender, luscious meat between halves of a housemade bun and serves it as a sandwich. The lone condiment, a sharp rapini pesto, provides the perfect counterpoint, sparing the diner an otherwise inevitable pork coma.

We'll try to reach Chef Olson and update this post when and if we do.