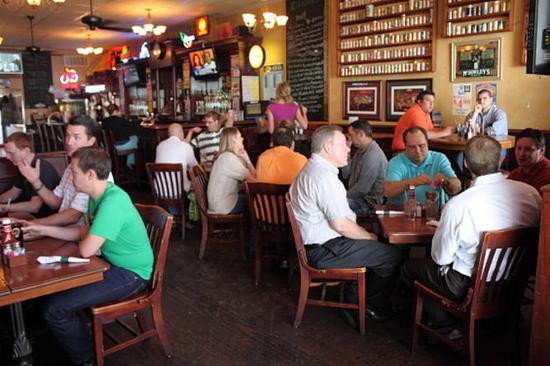 Marc Del Pietro tells Gut Check this afternoon that Kilkenny's Irish Pub (20 North Central Avenue, Clayton; 314-725-0161) will close after service on Saturday, May 26. When we spoke to Del Pietro last month, he told us only partly in jest, "Ever since we bought Kilkenny's twelve years ago, we've been selling it."

Now, he says, "Something finally came up that was acceptable."

Specifically, Del Pietro will continue to own the building but lease the Kilkenny's space to Pickleman's Gourmet Cafe, the small, Columbia-based chain of sandwich shops that opened its first St. Louis location (3722 Laclede Avenue; 314-802-7410) in 2010.

(St. Louis Magazine was the first to report on speculation that Kilkenny's would give way to a Pickleman's.)

As for shuttering Kilkenny's, Del Pietro says it was a matter of "lifestyles changing, priorities changing."

"The biggest thing is, it will be nice not going home at 1:30 in the morning."

As for the fate of his other Clayton restaurant, Luciano's Trattoria (172 Carondelet Plaza, Clayton; 314-863-9969), which has been shuttered since January because of the damage caused by a burst pipe, Del Pietro has nothing new to report since our last conversation.

"We're still in communication," with the landlord, he says. "Nothing's rock-solid."