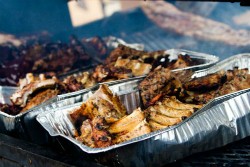 On Friday, May 18, St. Charles Community College (SCC) will be hosting its third annual Rhythm and Ribs event. Gut Check spoke with Betsy Schneider and Kasey McKee of SCC to get the lowdown on what to expect.

The name "Rhythm and Ribs" says it all. The SCC campus will be transformed into a giant block party with live music, succulent ribs, drinks and all-around good times. Ribs will be brought in from four different restaurants: Bandana's Bar-B-Q, Ethyl's Smokehouse, Mannino's Market and Stumpy's House of BBQ and Catering. If you're in the mood for something other than ribs, Chick-fil-A will also be on site with its trademark chicken sandwiches. As for vegetarian options, there won't be much other than side dishes from Missouri Kettle Corn and gourmet nachos by Quintessential Catering. But hey, after all, it's not called Rhythm and Veggies.

For drinks, patrons will have both Anheuser-Busch and O'Fallon Brewery beers to choose from, as well as wines from Terra Firma USA and teas and lemonades from Red Robin. Not a bad set of options for an outdoor concert.

The music will encompass a wide range of genres and begins at 6 p.m. with the SCW Jazz Ensemble followed by a variety show. The night will wrap up with a performance by Smash Band. On top of all the music and food activities, there will also be several raffles going on throughout the night. Baskets will each have a different theme so you can choose which collection you are most interested in winning. Tickets are three for $5, ten for $10, or you can even do an arm's length for $20. (We advise bringing your lanky friends and making use of their Stretch Armstrong-like arms for the biggest advantage.)

Tickets for the event start at $5, which also gives you access to the live music. The "Music and More" tickets are $25 and include three beverage tickets, seven food tickets, three raffle tickets and the live entertainment. The VIP tickets take it up another notch and include unlimited beverages, fourteen food tickets, three raffle tickets, live entertainment and access to the VIP tent and chairs. All proceeds benefit SCC scholarships.