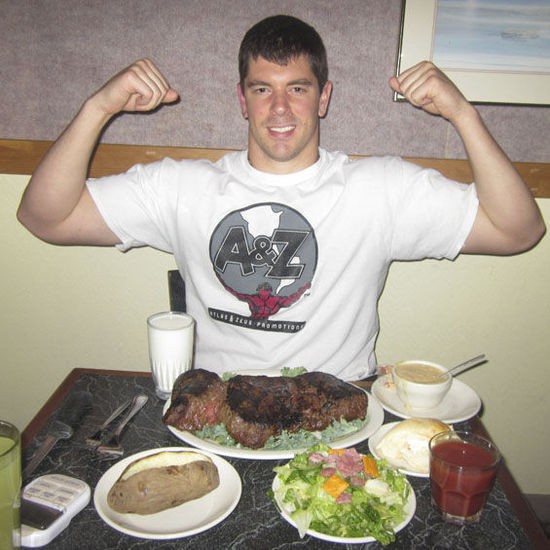 No review this week. Instead, Hanna Raskin, the restaurant critic for our sister paper Seattle Weekly, tells the story of Missouri native Randy Santel, who recently beat the eating challenge at Seattle's Wedgwood Broiler -- the first person to do so in the challenge's 47-year history.

On the night of May 5, Santel demolished the [72-ounce] steak, baked potato, salad, roll, cup of soup, glass of milk, glass of tomato juice and dish of vanilla ice cream in 41 minutes and 46 seconds. The following day he traveled to Tacoma to attack a six-pound burrito, the sixth food challenge he attempted during his three-day visit to Seattle.

According to Haskin, Santel has now conquered 100 eating challenges at restaurants nationwide.

Local eating-challenge aficionados will want to note that among the challenges that Santel has vanquished is the 28-inch "Pointersauraus" pizza at Pointer's (1023 South Big Bend Boulevard, Richmond Heights; 314-644-2000). Though Santel had a friend with him for this challenge, Raskin reports that he ate most of the pizza by himself.

For those wondering what it might be like for a mere mortal to attempt the Wedgwood Broiler challenge, five years ago Seattle Weekly editor and former RFT staff writer Mike Seely gave it a try.