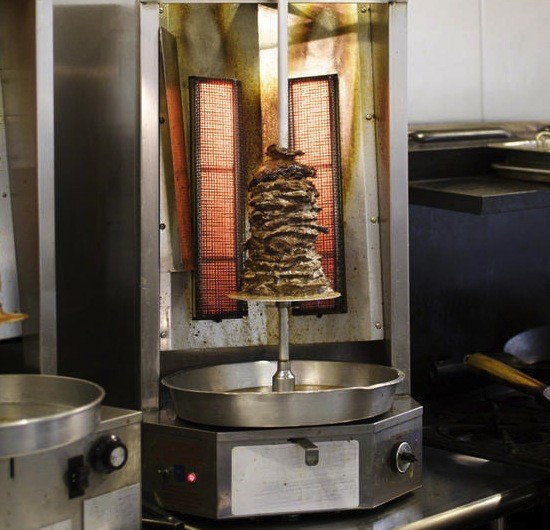 Ever the pop-culture sheep, I plunked down my hardly earned 26 clams and took my wife to see The Avengers this past weekend. Now, growing up, I was always more of a DC than a Marvel kid, so I appreciated the movie as popcorn entertainment, not a geek apotheosis. At any rate, I'm not to here to provide yet another review of a film that has proven itself in just two weeks to be a review-proof mint.

I guess there are spoilers after the jump, if you're one of the three people who has yet to see the film.

Near the end of the film, during a rare break in the frenetic final battle between our heroes and the airborne soldiers that the evil Loki has teleported to Earth from somewhere else in the galaxy, or another galaxy altogether, or maybe a parallel universe -- I'd stopped really thinking about what I was watching by then -- a beat-to-hell Iron Man looks up from the ground at Captain America and says, "You ever tried shawarma? There's a shawarma joint about two blocks from here. I don't know what it is, but I want to try it."

Later, in a brief, wordless scene after the final credits, we see the Avengers assembled in this shawarma restaurant, eating with varying degrees of enthusiasm. Cue laughter. Turn up the lights.

OK. Back to that first scene. I'd believe it if Thor, from Planet Norse or wherever (again: a DC kid here), had never heard of shawarma. Or maybe Captain America, who apparently was just unfrozen after 70 years in carbonite and probably isn't used to seeing Arab Americans, period, let alone shawarma joints.

But Iron Man, a.k.a. Tony Stark, globe-trotting, billionaire, playboy industrialist and arms dealer? You want me to believe that not once in his journeys or alcoholic fugues has the most worldly of superheroes encountered shawarma?

Shawarma isn't some mysterious, subregional specialty that needs Anthony Bourdain or Jonathan Gold to introduce it to a mainstream audience. Whether you call it shawarma, doner kebab or gyro -- and, yes, I know we could quibble about the differences among these terms, but they're all basically the same thing: meat or meats roasted on a slowly revolving vertical spit -- you're talking about one of the most ubiquitous and beloved fast foods in the world.

Then again, as someone who enjoys shawarma, I suppose I should be happy for the attention that The Avengers has showered upon it. After the film's opening weekend, TMZ reported a spike in shawarma sales in Los Angeles:

At Ro Ro's Chicken -- a famed Lebanese joint in Hollywood -- the manager says shawarma sales jumped 80% in the days after the movie opened.

Curious, I call the Delmar Loop location of the Syrian restaurant Ranoush (6501 Delmar Boulevard, University City; 314-726-6874) to see if it has experienced a shawarma spike.

"I have no idea," says the very confused but polite employee I reached.

Undaunted, I try Central Cafe and Bakery (331 North Euclid Avenue; 314-875-0657). After server Alex Bolano stops laughing at the premise of my question -- "You mean because Tony Stark told them to try shawarma?" -- he tells me, "[Our] shawarma has always sold very well."

He checks the day's receipts. Sure enough, about 75 percent of the restaurant's tickets have included shawarma.

Says Bolano, "I've got to see this movie."