Vote for St. Louis' Most Underrated Burger: Round One 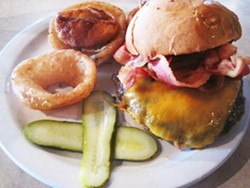 Last week, Gut Check asked you to suggest some of the most underrated burgers in St. Louis, and did you guys ever come through. Your 40+ comments inspired us to alter our plans, even.

From your suggestions (supplemented with our own personal experiences in a few cases), we've come up with a list of ten underrated burgers. Based on your votes, we'll narrow the list from ten to three for a final round of voting to choose St. Louis' Most Underrated Burger.

A few things before we unveil our ten semifinalists:

- There were several late nominations for Epic Pizza & Subs (1711 South Ninth Street; 314-644-4430). Again, based solely on our arbitrary and ad hoc rules, we've decided that Epic hasn't been around long enough to qualify as "underrated."

- Didn't register your opinion on our original post? Angry that your nomination didn't make our list? Don't worry. There's an option to write in your preferred candidate. Make use of it!

OK. Enough with the preliminaries. Page through to see our ten semifinalists and vote!

Voting closes at the end of the day Sunday, May 20.