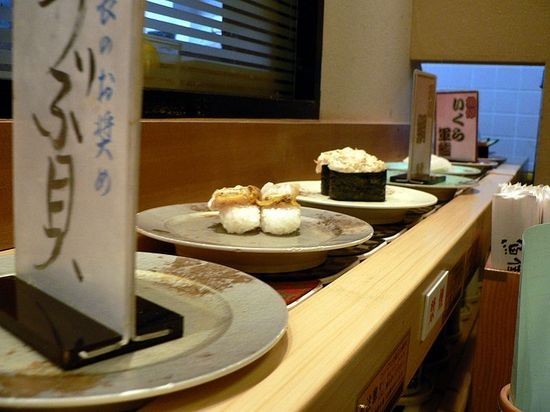 Back in January, Gut Check told you about Tokyo Buffet, the new and apparently quite large restaurant that will open at 8008 Olive Boulevard in University City. (This is in the same strip mall that houses Seafood City Grocery Store.)

Driving by the other day, I noticed that not only is the Tokyo Buffet signage now up, but right below the restaurant's name there's a sign trumpeting "conveyor belt sushi."

Believe it or not, conveyor-belt sushi is a Japanese innovation, not an American corruption.

Yoshiaki Shiraishi came up with the conveyor-belt system in 1958. Diners took their desired plates right off the belt; the color of the plate indicated the sushi's price.

From the 2001 New York Times obituary for Shirashi:

'He used to be amused with the popularity gained by his kaiten-zushi system around the world,'' said the spokesman, Takashi Yamaguichi, referring to Mr. Shiraishi's rotary sushi process. ''He borrowed the idea from beer bottles on conveyor belts at a brewery.''

Conveyor-belt sushi made its way to the U.S. years ago, but as far I can tell, Tokyo Buffet would be one of the first -- maybe the first? -- in St. Louis. I don't know if that's a cause for excitement, but it's certainly intriguing.