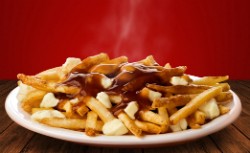 America has a tendency to ignore Canada, our neglected neighbors to the north, only paying enough attention to mock their accents. Canada, however, has a history as rich as our own -- minus a civil war, of course. They vote for an elected government, put their pants on one leg at a time and even drive on the right-hand side of the road.

But Canadians have something we do not: poutine, a delicacy of French fries and cheese curds covered with brown gravy. In Canada, poutine aficionados can enjoy this calorie bomb practically anywhere. They can pick up a sauce packet at the grocery and whip up a batch at home. They can snarf down poutine in cafes or visit fancy restaurants for upscale versions with lobster or truffles. Now, they can even buy it in the drive-through.

In conjunction with its nationwide launch of poutine, fast-food chain Wendy's has also launched an ad campaign to declare poutine the national dish of Canada.

That nationwide launch, though, is only for the nation of Canada. Pity the poor Canadian ex-pat trapped in the poutine-less wasteland of St. Louis. He or she can only watch the poutine promotions and salivate fruitlessly. Voting on the "poutition" is impossible as well.

What's the suffering, exiled Canadian to do? Yes, we can get French fries here at almost any fast-food joint; several, such as Culver's, A&W and Dairy Queen, carry cheese curds (albeit fried, not fresh) as well. Yet poutine remains out of reach. Poutine simply is not poutine without the sauce.

Gut Check knows at least one poutine aficionado who managed to scrape together a pale poutine substitute by adding a side of brown gravy to his cheese fries at a local restaurant. Cooking at home might be possible as well, but if any readers know where to find poutine in St. Louis, leave a note in the comments.

And if the idea of fast-food gravy induces salivation, rest assured that our standards for poutine excellence are not particularly high.