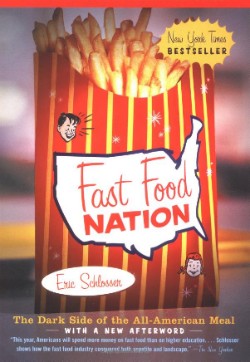 Eric Schlosser has taken on a variety of writing subjects in his time, from illegal immigration to marijuana to pornography, but he's best known for his sharp criticism of the fast food industry in his 2002 book Fast Food Nation. A proponent of the slow food movement, Schlosser tours the country several weeks a year to speak at colleges about sourcing fresh food locally. Next week, Schlosser will visit the metro area to participate in two events: a dinner at Farmhaus (3257 Ivanhoe Avenue; 314-647-3800) prepared by Josh Galliano and hosted by Slow Food STL, as well as a speaking engagement on April 25 at 7:30 p.m. at the Hettenhausen Center for the Arts at McKendree University (701 College Road Lebanon, Illinois; 618-537-4481). The talk is tentatively titled "Why you need to know what you're eating." Gut Check was able to catch up with the writer to discuss his new writing projects, dodging bad food in college towns and what moves he'd make if he ran the U.S. Food and Drug Administration. Click through for an opportunity to win tickets to Schlosser's speaking event at McKendree University.

Gut Check: When you go on speaking tours, how do you avoid the fast food pitfalls around college towns? Eric Schlosser: Well, you know...I'm not pure. I don't go to McDonalds or Burger King, or any of the fast food chains...especially when you're on the road, it's impossible to just eat perfectly. The good thing about being on the road is when I'm in a new town, I try to find some local restaurant that is family owned, like diner food. I like basic American food. Sometimes you just get incredible meals at really cool out of the way places, and sometimes you get the most disgusting food you can imagine. But its interesting, it's more interesting than going to some chain restaurant where it's gonna be exactly the same at 5,000 other locations.

GC: What's the worst meal you've had on the road? ES: (Laughs) You know, it's hard to pick. The worst...this is terrible, and I don't want to get too graphic, but the worst meals are the ones you see later on. We've all had those. That just happens occasionally. It's so much more interesting to go to idiosyncratic local places. There's a couple, Jan and Michael Stern, who write a series of books on road food. It's basically about off the wall, out of the way diners, hamburger places, stuff like that. So much of America has been homogenized and [put into malls] and made identical that whenever I can, I go to a local place that people like. If it's serving local food and its organic, that's amazing. But often that's hard to find, so at least to go to a place that's run by a family and has some integrity, that's what I try to do. Sometimes you gotta eat and it's mystery food from the airport.

GC: You've been working on a book about the American prison system for about ten years now; can we expect that to come out anytime soon? ES: No.

GC: No? ES: (Laughs) No. I put it aside because I thought I could write this book on nuclear weapons really quickly, but it's taken me a little longer. The next book I have coming out is on nuclear weapons, then the book on prisons comes out after that. Hopefully the prison book will be out in the next two to three years.

GC: Another thing you've written about is marijuana, since 1994. Missouri has a ballot initiative that they're trying to get on the ballot this fall. It'd be a legalization of cannabis. ES: Huh...full legalization?

GC: From what we've read it would be removed from the drug schedules in Missouri, and non-medicinal consumption for 21 and up. ES: Now what about selling?

GC: Lets see...everything would be defined for cannabis establishments. Medical cannabis would be available with physician's recommendation, but other than that personal use for 21 and up. You've been covering cannabis for a long time now... ES: I haven't been writing about it, but I definitely care about ending the war on drugs, so I've kinda followed it a little bit. There's been a sea change in attitudes, and I'm really encouraged. There's a certain generation that considers marijuana the demon weed and really racist. A lot of the laws about marijuana are incredibly racist and that generation is sorta passing away. For young people, there's a lot more common sense about it. The state of California, which had a very relaxed medicinal marijuana law, and the state of Colorado...they haven't collapsed as a result. If you look at the state with the most liberal pot laws in the United States, it's the state of Ohio where you can have up to three ounces, basically, decriminalized. And yet Ohio is not full of freaks and potheads and etc. There needs to be rational common sense laws about pot. The real danger right now is prescription drug abuse. Drugs that are legal but are deadly like Oxycontin and all kinds of overdoses from legal drugs. Marijuana is not harmless, but it's so much less harmful than a lot of things that you can just go to the drugstore and buy. Before I come to Missouri I'll really read up on that initiative, I hadn't heard about it. I'm in favor of people being able to grow their own pot and possess it in small amounts. What I really want is for the black market in marijuana to be eliminated. I'm not so sure that pot should be advertised on T.V. or it should be marketed like how fast food is marketed, but nobody should be afraid of going to jail because they need to smoke pot to relieve pain or watch a movie.

GC: Marketing is a big thing that plays into the food we eat as a culture. How do you think that's changed with the marketing of the organic and health foods? ES: There's just been a huge change in how educated and wealthy and upper middle class people are eating. In the last ten years, they've changed their diet...they're not eating at fast food places they used to, they're not eating heavily processed food. They're so much more aware and concerned about where their food comes from, and that's great. The cheap highly processed food is becoming the food mainly of the poor. You've got this weird society developing in which the wealthy are eating this incredibly good food, are fit and are seeing their doctors, and the poor are being aggressively targeted by soda companies and fast food companies. The worst impact of the obesity epidemic now is in the low-income communities. I'm not against marketing, per se; if you've got a product, you gotta get the word out about it. What I don't like is deceptive marketing, what I don't like is taking an unhealthy product and targeting poor people with it. What I especially don't like is marketing unhealthy or dangerous things to kids. You mentioned with pot, the 21 and up thing...I would really put tough laws on what you can market to children. If you're 21 and want to smoke a joint and go have three Big Macs, well you're an adult. You're responsible for your behavior. These fast food and soda companies should not be targeting two, three, four-year-old kids with products that will contribute to poor health.

GC: Let's say a magic wand is waved and you're running the FDA for one day. What are the five things that you're going to implement immediately? ES: I would ban almost all antibiotic use with livestock and make it very tough for them to give antibiotics to livestock. The livestock would have to be really sick and it would be a strict procedure. I would ban of all growth hormones in livestock. Those are two crazy things that we're doing.

I don't know if you saw the New York Times last week...I would ban the feeding of feathers to poultry. These feathers are just so contaminated with different stuff.

And that leaves me with number five. And this is the FDA, huh? I would find a way for the FDA to really crack down on factory farms, especially these big livestock operations that are treating these animals so cruelly. I don't know how they'd do it, but it would be number five.

Giveaway Want to win a pair of tickets to Schlosser's speaking engagement at McKendree University? Gut Check has three pairs of tickets to toll out to the three best answers to this question: If you were in the charge of the FDA, what would you do differently, if anything? Rules: To be eligible, you must leave a valid e-mail address (or Twitter handle or Facebook profile URL) in the comment-entry field. One entry per e-mail address. Employees of McKendree University and Riverfront Times are not eligible.