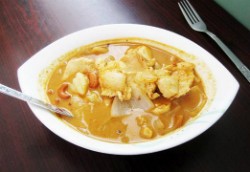 On Sunday, April 22, the Thai Association of Greater St. Louis hosts its annual Traditional Thai New Year Festival, also known as the Songkran Festival, from 10:30 a.m. to 5 p.m. at the Thai Buddhist Temple of Greater St. Louis (890 Lindsay Lane, Florissant; 314-839-3115). The event is free to attend with the exception of food and drink purchases, which of course, is Gut Check's bag.