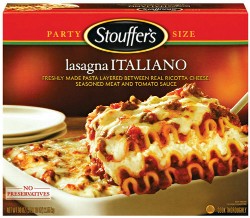 Voluntary food product recalls for mislabeled or missing allergens aren't the stuff of scandal, but when a company mass produces a product and labels it with a totally incorrect product name and it's missing allergen information, Gut Check's ears perk up.

Yesterday, Nestlé Prepared Foods Company, released a voluntary recall of 16,890 pounds of Stouffer's Lasagna Italiano frozen entrées that, according to a press release from the the U.S. Department of Agriculture's Food Safety and Inspection Service, might instead contain stuffed peppers with Worcestershire sauce. More important -- though less hilarious -- than the embarrassing gaffe of labeling stuffed peppers as lasagna is the allergen concern, as Worcestershire sauce is made with anchovies, a known allergen that is not listed on the frozen lasagna labels.

In general we're not big fans of frozen lasagna or many frozen T.V. dinners. We're not sure that upon pulling back a frozen dinner film cover we'd immediately notice such a fuck-up or that the taste would quickly clue us in right away, either. But we do know what lasagna is suppose to taste like and it has nothing to do with stuffed peppers. If you've recently purchased Stouffer's Lasagna Italiano but haven't delved into the box yet, check the expiration date: The recall applies to products labeled with a "best before" date of January 2014. Of course, that's assuming Nestlé Prepared Foods Company printed the correct date on the box, which, all things considered, might need further investigation as well.