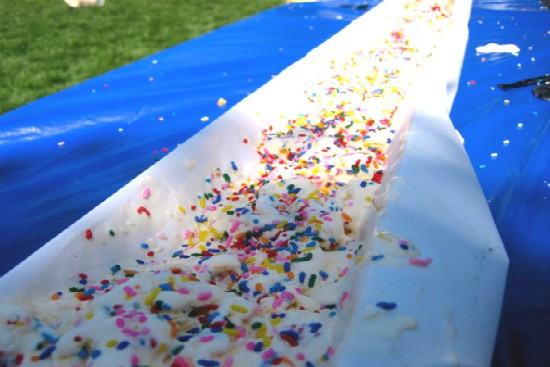 On Wednesday, April 11, Webster University (470 East Lockwood Avenue, Webster Groves; 314-968-7128) broke the Guinness World Record for the "Longest Ice Cream Dessert." You might not have known there was a record to break, but up until Wednesday, the record was 152.2 feet. Webster blew that sad little junior sundae out of the water with its 200.3 foot ice cream sundae, which was built on the university's quad.

This epic and delicious event was the kick-off to Webster's annual Spring Fest. Gut Check spoke with campus activities program manager, Lauren Douglass, to get the full scoop on how this record-breaking event came to be.

Douglass explained that Webster's campus activities group booked the band Reel Big Fish for its annual spring concert, so the theme for the week became: "It's big. Reel Big." When brainstorming ideas for ways to jump start Spring Fest, they figured -- what's bigger than breaking a world record?

The campus activities group at Webster has made giant sundaes in the past, so they weren't strangers to the world of over-sized desserts, but this was definitely the largest attempted in the college's history.

Set-up for the sugarcoated event began at 11 a.m. on Wednesday, March 12, and construction of the colossal sundae began at noon. With more than 80 volunteers scooping and sprinkling away, the record was broken in less than 30 minutes. Minnick's Surveying provided the official measurement of 200.3 feet and served as official witnesses alongside Hannah Ingram of the Opera Theatre of St. Louis.

The record-breaking sundae included 456 pounds of vanilla ice cream, eight pounds of cherries and fourteen pounds of rainbow sprinkles. The epic sundae lasted only long enough to get the official measurement -- once the announcement was made, students, staff and Gut Check swarmed the Slip 'n Slide-shaped dessert with spoons and bowls in hand. Our conclusion? Breaking records never tasted so good.

Desserts & Sweets How Big Is That?