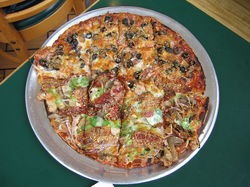 Would ya look at that. St. Louis-style pizza is having itself what we in the media call "a moment":

Last week, there was a long, approving article on our cracker-thin, Provel-topped pie on pizza-centric blog Slice. Now, USA Today has turned over its "Great American Bites" column to an appreciation of Imo's Pizza: "The largest pizza chain you never heard of, Imo's is to St. Louis pizza what McDonalds is to hamburgers."

Gut Check sorely wants to point out just how unintentionally apt that analogy is. At any rate, the article includes an interview with founder Margie Imo, who reveals a factoid I'd never heard before: St. Louisans prefer sausage as a topping, not seemingly universal favorite pepperoni.

The USA Today love for St. Louis doesn't stop there.

(There is also a bakery run by a Cupcake Wars judge, and another by the celebrity chef Todd English and his daughter, which as far as Gut Check can tell has yet to appear on either show.)

Willman makes quite the claim for Jilly's: "Willman says most anyone in his hometown of St. Louis knows that Jilly's is the place to go for cupcakes."