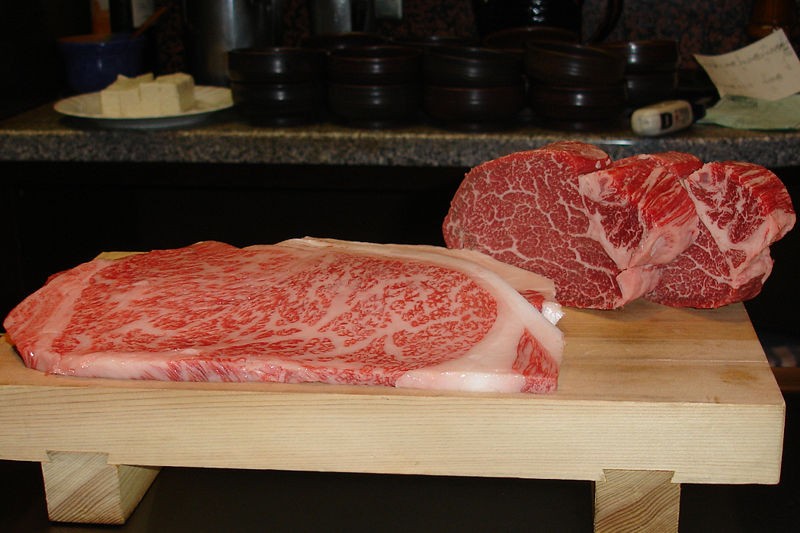 You cannot buy Japanese Kobe beef in this country. Not in stores, not by mail, and certainly not in restaurants. No matter how much you have spent, how fancy a steakhouse you went to, or which of the many celebrity chefs who regularly feature "Kobe beef" on their menus you believed, you were duped.

As Olmstead explains, true Kobe beef raised in Japan's Hyogo prefecture is never exported, except to Macao, and no beef from Japan has been allowed into the United States since 2010.

The piece is excellent, and you should read it, but it did leave me puzzled. Do that many restaurants (or groceries or whatever) truly "dupe" consumers into thinking that they are eating the real-deal Japanese beef?

I can't think of an instance in St. Louis when a menu didn't make clear (if only in the fine print) that its "Kobe" beef was actually American or Australian "Kobe" beef.

Then again, the menu describes this American "Kobe" beef as "the most expensive meat in the world for the most discriminating palate," which probably is the sort of thing to which Olmstead objects.

Olmstead promises a second article tomorrow in which he'll argue that "domestic Kobe" and other such terms are "meaningless." If you don't want to wait, this passage from today's article seems to preview that argument:

...the term Kobe today has even less meaning, and the meat can come from many different countries and have nothing in common with actual Kobe beef except that it comes from cows. The argument often broached by the food industry that this non-Japanese Kobe is some sort of recreation of the real thing from the same breed of cows is also largely a myth.