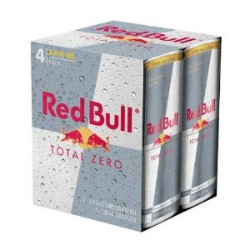 Not everyone at Gut Check is a fan of energy drinks, but for those of us who have made peace with destroying our livers, they remain a shameless addiction. We know they can't be good for us, but neither is a diet rich in cheese and sugar, so it doesn't totally assault our food-based worldview. While we've become comfortable with the usual taurine-laced suspects (original and sugar-free Red Bull, Monster, Amp, etc.) we were filled with equal parts horror and glee to see a new member of the Red Bull family sitting pretty in the refrigerator of our local Circle K: Total Zero Red Bull, an imposing, if not ominous, gray and silver can -- likely to represent the color of your liver after consumption.

Though Total Zero is new to Gut Check, a bit of research revealed that Red Bull North America released the product in select markets in the U.S. on April 2. The product is marketed as "zero calories, zero carbs and zero sugar," which in theory separates it from sugar-free Red Bull in calories, but the twelve-ounce can of Total Zero that Gut Check purchased is listed as having ten calories. The best we can surmise is that Total Zero is the company's equivalent to Dr Pepper 10, in that it's essentially the same product with more "masculine" packaging -- seriously though, the tone-on-tone gray more closely resembles a bio-hazardous material canister than it does a drink can.

With a refined energy-drink palate honed in college and perfected to combat hangovers during our early twenties, Gut Check tried Total Zero and found it wanting. It had the same metallic taste that we've come to know, love and fear from sugar-free Red Bull, but a strong Sweet Tarts-flavor finish ruined it for us. Call us old fashioned, but for now, we'll be sticking with our familiar -- if not fatal -- sugar-free cancer juice.

This Just In WTF?