Who Wants to Pay $500 to Eat the Last Meal Served Aboard the Titanic? 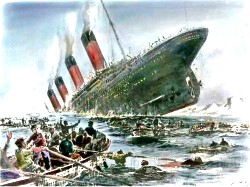 Man-made disasters and tragedies range from the historic to the Darwin Award-winning, but no single event has proven to be as romanticized or lucrative an enterprise as the deaths of those 1,514 people who went down with the R.M.S. Titanic on April 15, 1912. Though it hasn't been news in 100 years, the sinking of the Titanic has remained a morbid, nostalgic curiosity for historians, novelists, filmmakers and grave robbers.

This month marks the 100th anniversary of history's sexiest shipwreck, and in honor of those dead people who would all already be dead anyway, a lot of weird shit is happening. Don't get us wrong, Gut Check can indulge in pop culture's gross obsession with human misery to a degree -- we'll definitely be seeing Titanic 3D, but mostly for Kate Winslet's boobs, not to lust after maritime catastrophe. The Titanic 3D death rattle is no surprise -- Paramount Pictures wants the money, James Cameron wants to nerdily toy with his 1997 blockbuster.

Other tributes range in quality from the flowery but well-produced BBC series Titanic written by Downton Abbey creator Julian Fellowes to a disaster-boner National Geographic special narrated by Cameron. Oh, and who could forget the Titanic Museum in Branson, Mo., where, on April 10 and April 11, you can meet the grandson of the highest ranking Titanic officer to survive the sinking, who traveled all the way from Scotland to visit a bunch of gawking weirdos in Branson. Yep, that's a real thing.

The spectacle that bemused Gut Check the most, though, is one happening close to home. On April 14, the Fabulous Fox Theatre (527 North Grand Boulevard; 314-534-1111) hosts an entire weekend of events dedicated to the unsinkable ship, titled "A Titanic Centennial Weekend." In theory, Titanic-themed fundraisers to support the Fox make sense; it's an enduring cultural preoccupation and proven moneymaker. We assumed one of the many Titanic-inspired films would be screened, or perhaps an ambitious, loosely-based-on-real-events stage adaptation. How about a vulgar recreation of the last dinner that first-class passengers ate before meeting their watery graves? Because, yes, that's what's happening. For $500 you can experience the eleven course meal that for some would be the last meal they'd ever eat. What the actual fuck.

Not only is the meal an authentic reproduction, but the entire evening is a total recreation of that fateful night's events, right until the ship tailspins into the icy Atlantic. Upon arrival each guest is given a boarding pass and an envelope with the name and historical biography of a real first class passenger -- pish posh to the hoi polloi down in steerage! During the luxe dinner, which is hosted on the stage of the Fox, musicians will perform the same music that would be the last happy moments the original passengers would ever know. The Fox bills the event as:

"...a once-in-a-lifetime opportunity for guests to be part of 'living history' and go back in time to experience the elegance, grandeur and luxury of the R.M.S. Titanic, while enjoying a gastronomical extravaganza from another era."

The only non-crazy putty part of the thing is that all proceeds from the evening benefit the Fox Performing Arts Foundation. We're not monsters; sure, we want the Fox Performing Arts Foundation to flourish. We just don't understand how this dark, cheerless countdown to the hereafter is the best way to raise funding, or even the best way to commemorate a historical event. If last supper recreation meals were hosted to celebrate the centennial of other tragic events (Pam Am Flight 103? The Space Shuttle Challenger explosion?), we feel like the overwhelming tastelessness would be more obvious. Apparently, when it comes to the Titanic sinking, nothing is off limits.

Mind Your Fucking Manners News of the World