Sure, we're a long way from the nearest ocean, but that doesn't mean you can't enjoy excellent sushi, from simply elegant nigiri to elaborate rolls. Our five finalists from RFT's Best of St. Louis 2011 are after the jump...

We're cheating a bit on this "finalist": Chop Shop didn't hit the streets until the very beginning of this year, well after the Best of St. Louis 2011 had been published. So consider this a preview for the 2012 edition. Eliott Harris remade the sushi menu at Miso on Meramec into one of the area's best (see below). On his food truck, he has brought his inventive touch to how you eat sushi: In delicious overstuffed rolls that you hold like a wrap or burrito. Try the "El Camino," with spicy tuny, cucumber, avocado and a garlic-ginger ponzu. 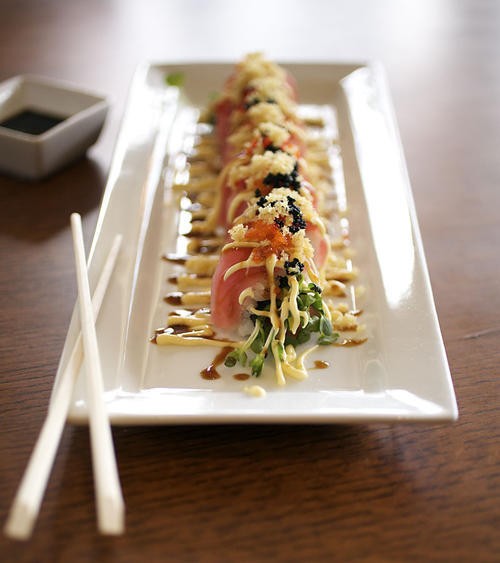 Paul Kulkanjanatorn is Fin's owner and head chef. Though originally from Thailand, he has a long history with Japanese cuisine: When he was a child, his father ran a Japanese restaurant in Thailand, and he has been working as a sushi chef for the better part of a decade. The nigiri sushi is generously portioned and beautifully presented: a piece of mackerel is cut so the leading silver edge narrowed through the striations of the fish's flesh to a tapered point, while a piece of salmon is adorned with a crescent of raw onion held in place by a ribbon of seaweed. The rice is the ideal consistency, neither too loose nor refrigerated into a cold, glutinous lump.

Miso on Meramec received a burst of energy when sushi chef Eliott Harris arrived in 2009. He left last year to found his food truck, Chop Shop (see above), but his legacy remains in such inspired rolls as the subtle, elegant "Araka Roll," which adds a grace note of Asian pear to an assortment of tempura shrimp, salmon, cucumber and avocado. The "Shaw Park Roll," featuring wasabi pea-encrusted hamachi, might be the crunchiest sushi you've ever eaten -- and among the most delicious. The standout is the "Papasan Roll," a brilliant pairing of cool, sweet striped bass with a raw jalapeño wafer. Nobu's (8643 Olive Boulevard, University City; 314-997-2303)

Chef Noboru Kidera works a kind of alchemy at his University City restaurant. The deft movements of his hands as he works at the bar, chatting with diners, demonstrate just how complex the making of sushi is. But what you notice about a piece of Kidera's nigiri sushi is its utter simplicity: the small mound of rice, a brush of wasabi, and then the fish, cut to the perfect thickness and impeccably fresh. The standard sushi selection is excellent -- salmon, topped with a sliver of bracing raw onion, and mackerel especially so -- but treat yourself to luscious toro or something unusual, like "The Traveler."

Tani Sushi Bistro is the rare sushi restaurant that will appeal to fans of both old-school sushi and contemporary "Americanized" rolls -- you know: the flashier, the better. And you don't get much flashier than Tani's "Oh My God" roll, a combination of shrimp tempura, shrimp, crab and avocado that's set on fire at your table, though the colorful "Samba" roll, made with tuna, yellowtail, cucumber, avocado, green onion, cilantro and a serious one-two punch of jalapeño and chile sauce gives "God" a run for its money. Those are flashy, yes, and also delicious. If you look past the pyrotechnics, you'll find exquisite nigiri sushi, the rice expertly seasoned and the perfect temperature. The fish is impeccably fresh, whether you splurge on fatty otoro (tuna belly) or keep the tab down with saba (mackerel), which though humble is both delicious and, for the most part, sustainably fished. Whether you love the old or the new -- or both -- consider ordering one of the rolls named after a St. Louis athlete (Chris Carpenter, Steven Jackson, David Backes). When you do, a portion of the price goes to a charity of the athletes' choice.