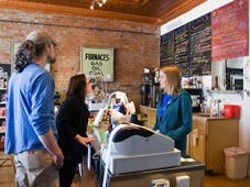 The Kirkwood location, to be called Local Harvest Grocery, Cafe & Catering Kirkwood, will be located at 12309 Old Big Bend Road, in the space formerly occupied by McDonnell's Market. As its name suggests, this Local Harvest will feature both a grocery and cafe seating for 40 within its 6,000-plus square feet. The planned opening is August 1, 2012.

Local Harvest Cafe & Catering Downtown will be located at the Old Post Office (815 Olive Street). The space will have seating for 100 and serve breakfast and lunch Monday through Friday and brunch on the weekend. A July 1, 2012, opening is planned.

Update: "We have been looking for a second location for a while," Local Harvest owner Patrick Horine tells Gut Check this afternoon.

How did that location end up in Kirkwood?

"We were approached by a family in Kirkwood who were interested in investing, [and] it coincided with the closing of McDonnell's Market."

Horine says the new grocery store will feature the same focus on local products, but the larger size -- three and a half times bigger than the original -- will allow it to carry a greater variety of products.

Adds Horine, "We're going to have a section called 'Homesteading' for cheesemaking and brewing supplies."

"It will be the same menu," says Horine. "Some of the seasonal specials might be different." In addition, the new cafe's larger kitchen will allow it to offer a few additional dishes.