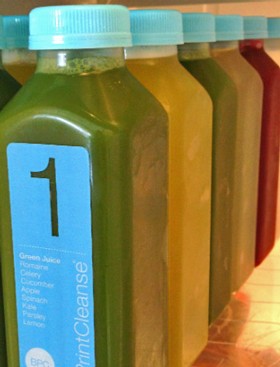 Gut Check's first day on Blue Print Cleanse's detox juice cleanse was definitely an adjustment. But how does one approach their daily routine on the cleanse and stay active while constantly needing to grab a new bottle of produce from the refrigerator? Never fear, health nerds. In addition to the juices, the cleanse comes with a refrigeration bag with long release ice packs. Gut Check's mission today was to retain a normal schedule with the cleanse and see how well we'd do.

9:15 a.m. Up bright and early for breakfast* this morning. Unlike yesterday, we're actually looking forward to the stuff. A quick weigh-in reveals five pounds have evaporated after day one of the cleanse -- too bad we're too old for prom season, right? Today, everything seems to be coming up roses, so much so that even our spring allergy-triggered sneezes are sounding incredibly healthy.

*green juice 11:00 a.m. Aside from the decadently delicious cashew milk "dessert" drink, the "gold" juice made with pineapple, apple and mint clocks in as a close second as one of our favorite drinks thus far. It's not the most traditional combination, but it's damn good.

11:45 a.m. The "cleaning effects" of the cleanse have manifested themselves in the bathroom. Don't worry, we won't beat you over the head with the nasty details like others might, we'll just say that pipes have been cleaned and the ins and outs of it weren't so pretty.

1:23 p.m. We decide to take the refrigerator bag out for a spin while taking a walk with a friend and his dog, while sipping the second green juice of the day. The weather was perfect for a brisk walk, and as we're enjoying the unseasonably warm March afternoon, we realize we're not only eating healthfully, we're also exercising. Where is that pizza-scarfing, pass-the-mashed-potatoes junk food fiend we once knew? Who is this walk-taking, juice-drinking stud staring back at us in the mirror?

3:00 p.m. Right at the halfway point of the cleanse, hunger hits us like one too many shots of whiskey. Solid food cravings are hitting Gut Check pretty hard, weakening our resolve; commitment is becoming more difficult when thoughts wander to enjoying nachos and a cold beer during March Madness. Instead we reach for another bottle of juice. Channeling Gut Check's inner Jack LaLanne helps us to stay on track: What Would Jack Do? He'd drink a juice and quit the bitching, dammit.

4:30 p.m. Relaxing with a glass of spicy lemonade calms our nerves. We're now debating whether or not to always add cayenne pepper to lemonade from here on out. There's another side effect to the cleanse that is taking hold, and it's an odd haze-like state of mind. Since there isn't as much blood being pumped to the stomach for food digestion, more blood is sent to the brain. This would explain our sudden urge to run five miles while solving algebra equations a la Good Will Hunting.

6:00 p.m. Alright, that lemonade didn't cut it. Gut Check is still very hungry but refuses to give up so soon. What, like Fred Durst? It might just be one of those days, but it's never as bad as all that.

7:40 p.m. Watching an NBA game with friends with dinner* sitting in the refrigerator bag. While others crack beers, Gut Check contently sips on juice and fields a mini Q&A session about cleanses and subsisting on liquids alone.

9:15 p.m. The best part of the day: CASHEW MILK TIME! If that feels like an overreaction, it's probably because you've eaten solid food in the last 48 hours. Not Gut Check. Now, if we could only have some cookies, too.

11:30 p.m. After an active day, we're shutting it down early. Currently feeling slightly light-headed, tired and dealing with constant, nagging hunger. Thankfully there's only one more day of the juice cleanse left. Will we make it? Will the temptation to pair real dessert with our cashew milk dessert be too strong? We'll report back tomorrow to share the (potentially gross-out) details.