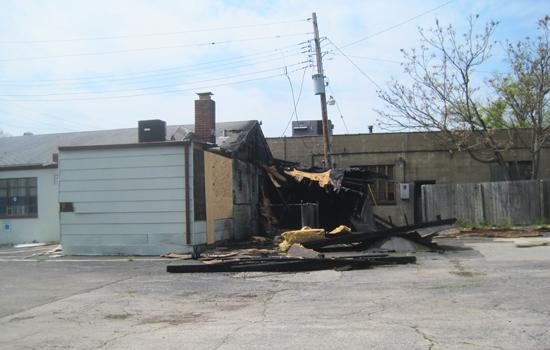 According to multiple reports, a fire overnight struck the abandoned Kramer's Olive Bistro restaurant at 8141 Olive Boulevard in University City. Though at least one headline states that the restaurant was "destroyed" by the fire, the building remains intact, with much of the damage at the back.

KTVI reports that the arson investigators are working to learn the cause of the fire, which apparently started outside the restaurant.

Interestingly, KTVI quotes witnesses who say the restaurant has been abandoned for "at least three months." As someone who drives that stretch of Olive fairly regularly, I thought the restaurant had closed even longer ago than that -- indeed, neither the RFT, Yelp nor Urbanspoon have listings for Kramer's Olive Bistro that I could find. Did any readers happen to visit the restaurant when it was supposedly open last year?

According to St. Louis County records, the property at 8141 Olive is owned by a Chen Yan of St. Louis. More as we learn it.