This is part one of Gut Check's Dinner and Movie feature of The Hunger Games. Part two, a review of the film, will be published tomorrow, and part three, a Hunger Games giveaway, will be available on Friday. 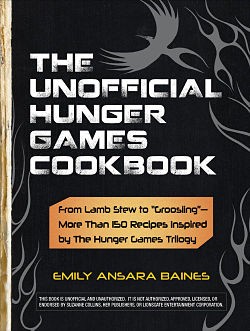 Gut Check was thrilled to learn of the existence of The Unofficial Hunger Games Cookbook. Mostly, we wanted to know what the hell "groosling" was. Turns out it's imaginary, but it was still exciting to learn that the book has four recipes for squirrel. Eating squirrel, we thought, would help us to more fully appreciate the hardships of life in District 12 and inside the game arena. We were particularly taken with the recipe for Grilled Tree Rat with Peanut Butter Dipping Sauce.

We could, of course, have gone to Tower Grove Park armed with a bow and arrow, which would have been in the spirit of The Hunger Games, but we freely admit we're not as big a badass as Katniss Everdeen. We're part of the Establishment. We got a guy. His name's Scott Harr, and he runs Harr Family Farms at the Soulard Farmers' Market.

We were just about to hang up in despair when Scott said, "I can get you a rabbit."

We selected the Freshly Snared Barbecued Rabbit, mostly because of the scene in the book where Katniss snares a rabbit and roasts it over a dead tribute's campfire. It sounded like the best thing ever. We got a little suspicious when we saw "Spicy Chipotle Rub" on the list of ingredients. We didn't remember spices being in the Cornucopia, but the author's note soothed us:

Lucky for us, we have an oven and spices, but this recipe will help give us a taste of the wild game Katniss was forced to survive on during the 74th Hunger Games.

OK then. The chipotle rub had a shitload of ingredients, but it was pretty easy to assemble, and it turned the rabbit a lovely ruddy color.

Oh, and about that rabbit. Rabbits look smaller when they're dead and skinned. A lot smaller. We could see the nub on the rear end where the little cottontail used to be. We thought of impending Easter and bunnies, and felt a little weird. But that would never stop Katniss, so it would behoove us to follow her lead.

The recipe suggested roasting the rabbit in the oven, but it seemed more in the spirit of The Hunger Games to cook it over fire. Well, OK, on the grill. Plus the weather felt like summer and the smell of charcoal was redolent over south city, and it would have seemed wrong to stay inside.

The rabbit tasted like chicken. Really, really spicy chicken. That was fine with us. The spice rub made us feel brave. We kept it, sealed in a Ziploc bag. Maybe we could use it as a weapon. Because if there's anything we learned from The Hunger Games, it's that you need to use everything at your disposal to insure your survival.

Still, there wasn't much meat on the thing and we were hungry again two hours later.

Do you want the recipe for Freshly Snared Barbecued Rabbit? Click here if you're curious, and, for more, check out The Unofficial Hunger Games Cookbook: From Lamb Stew to "Groosling" - More than 150 Recipes Inspired by The Hunger Games Trilogy (F+W Media, December 2011; $19.95) by Emily Ansara Baines.

Dinner and a Movie In the Kitchen