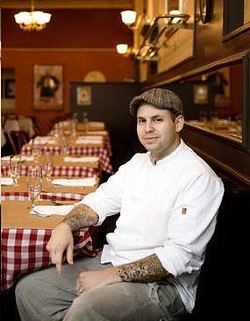 Craft was in a meeting when he heard the news: "It was exciting," he tells Gut Check.

The Beard nomination follows last week's news that Niche is one of the 100 top U.S. restaurants, according to a survey from the website Opinionated About Dining.

"It's all awesome to hear," Craft says of the accolades. "I think our team has been working so hard the past year. I think we've all been trying to push ourselves. We don't need the awards, but it's a nice pat on the back."

The winner will be announced at the awards gala in New York City on Monday, May 7.

Craft was one of four St. Louis chefs who were semifinalists for the award, along with Josh Galliano of Monarch, Kevin Nashan of Sidney Street Café and Kevin Willmann of Farmhaus.

In addition, Salt was a semifinalist for the "Best New Restaurant" category but didn't make the cut to five finalists.