Dear Jessica Simpson: Name Your Baby After These Grape Varieties, Not Zinfandel 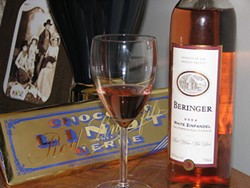 Gut Check isn't above browsing the celebrity gossip, but we saw this juicy tidbit via Grub Street rather than our usual supermarket tabloids: Jessica Simpson -- did she sing? we honestly can't remember why she's famous in the first place -- and her fiance considered naming their soon-to-arrive child Zinfandel.

Yes, that's right: Zinfandel, as in little-z zinfandel, the grape that produces either A) a brawny red, or B) a wussy "white." So I guess they would have had their bases covered however the kid turned out.

At any rate, cooler heads prevailed, and baby Simpson will be named Maxwell. Which is a shame, really. As ridiculous a name as "Zinfandel" might have been, Simpson and her baby daddy were on to something. Booze has been at least partly responsible for more than a few instances of conception, after all. Why not honor its role as a, um, social lubricant?


The trick, of course, is to find a grape with a lovely and/or cool name -- and that will raise eyebrows only among wine aficionados. On behalf of parents-to-be everywhere, Gut Check has gone ahead and identified ten such grapes.