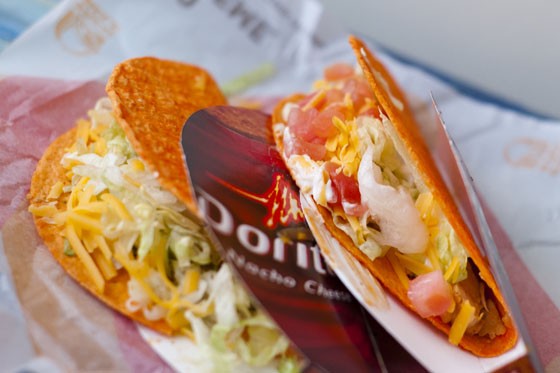 ​Earlier this month Gut Check caught wind that Taco Bell was launching its classic signature tacos with a new twist: Doritos-flavored shells. First thought we had upon hearing this news?

There is a God.

But really, what wonderfully gluttonous bastard stumbled upon an idea so brilliant, yet so logical -- so easy! -- that it's strange to think no one had come up with this sooner? No matter. Whoever he or she is, we salute you (cue "Real Men of Genius.").

The Doritos Locos Tacos comes in two forms: the "Regular," which consists of "100 percent premium seasoned beef" (emphasis on the "100 percent"), shredded lettuce and cheddar cheese, and the "Supreme," which also includes diced tomatoes and reduced-fat sour cream. We opted for a compromise of sorts: three tacos (two supreme, one regular) with chicken instead of beef. Be warned: The chicken jacks up the price. Seriously. Three tacos with a side of lava sauce made a $9.70 dent in our debit card.

We are sorry to report that this shell is not a true Dorito. It just doesn't have the same crunch. That said, it's a fair approximation, and it's darn tasty. So no complaints, just a suggestion to lower your expectations a smidge and don't go in expecting a taco shell that jumps out and screams, "I'm a goddamn nacho-cheese Dorito!" the way some (and by "some" we do mean Gut Check) might hope it would. Still, there's something to be said for subtlety, because the shell nicely complements the taco. The chicken was lightly marinated and cold. But the rest of the crap in the filling -- the shredded lettuce, the tomatoes, the sour cream and the impossibly bland cheddar cheese that despite its flavor deficit (or perhaps because of it) gives Taco Bell tacos their telltale je ne sais quoi -- was cold too, so deal with it. We sure did, and then licked the nacho-cheesy residue from our fingers like a kitty that just stepped in catnip.

Upon reflection, we'd say the Dorito shell's impact diminishes when you wrap it around a Supreme, what with the reduced-fat sour cream. (Note to Taco Bell: Does "reduced fat" have any meaning when it's inside a taco shell made of Doritos?) Oh, and the lava sauce: If you like your nacho cheese-flavored Doritos spicy, this is for you. Jalapeños, cheddar, and Monterey Jack -- disgustingly delicious!