This is part two of Emily Wasserman's Chef's Choice profile of Jamey Tochtrop of Stellina. Part one can be found here. Part three, a recipe from Tochtrop, is published here. 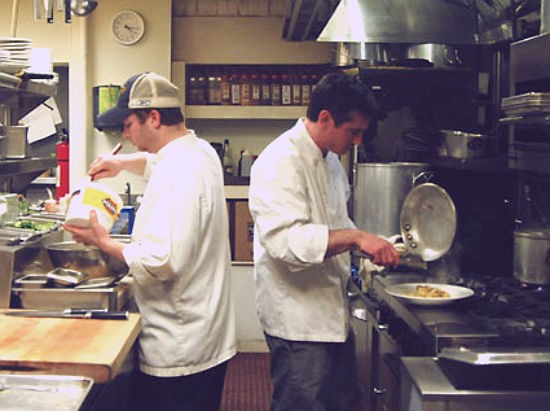 How old were you when you started cooking? I did prep work when I was fifteen for a catering company. I started cooking more seriously when I was eighteen or nineteen. I went to school at Forest Park Community College for culinary arts and hotel/restaurant management.

Did you attend culinary school or college? If so, where and for how long? Yes. The program is two years, but I went three years and got [an] associate degree in culinary arts and hotel/restaurant management.

What do you eat? Everything. I don't think there's anything I don't eat. It depends on what mood I'm in.

What do you cook at home?Whatever my son tells me to cook.

What are your three favorite restaurants in St. Louis (besides your own!)? I can't choose just three. For fine dining, Sidney Street Café, Farmhaus, Franco and Brasserie by Niche. For more casual dining, I like Lemongrass.

The local chef who most impresses you? Kevin Nashan from Sidney Street Café.

Your favorite restaurant elsewhere? Charlie Trotter's in Chicago. It's my most memorable meal. It's one of the top restaurants in the world, but they're closing in April.

Favorite recent food find? A Vietnamese pork dish I had last Monday at my friend Ben's house. He's a sous chef at Old Warson Country Club, and his wife is the chef at a racquet club in Ladue. We take turns cooking on the weekend. His wife does most of the work and he takes the credit, but that's how it is with most chefs. [Laughs]

Most essential ingredient in your kitchen? Jim Beam. [Laughs] Salt.

Favorite local food find, and where do you get it? Spigarello from Clavarach Farm -- it's a cross between kale and broccoli. Also, Cacuzza squash.

One food you dislike. I don't think I dislike anything...except oregano.

A food you can't live without. Pastas, even though I'm completely sick of eating it most of the time.

An ingredient never allowed in your kitchen. Dried herbs.

Culinarily speaking, St. Louis needs more... I don't think it needs more of anything. I think it's pretty diverse, and it's getting better and better.

Best tip for home cooks. Cooking is simple. If it interests you, try it. Don't make it too difficult. I definitely think that food is becoming more approachable.

What's next for you? Working tonight. [Laughs] I have some ideas, but I'm not ready to talk about them yet.

What inspires you? I like to create. I like to make art, whether it's food, music or painting.

Chefs who inspire you. My good friend Ben Groupe -- he's on the National Culinary Team.

Favorite cookbooks?I like Alinea a lot. French Laundry is a reference tool we use a lot here. I also like the Momofuku cookbook.

Favorite music to have in the kitchen. That's such an argument. But the Red Hot Chili Peppers.

What's on your pizza? Sausage, mushroom, onion, black olives. Maybe not all those on one pizza, but those are my favorite.

What's in your omelet? Vecchio cheese and arugula.

What are you drinking? Jim Beam. And probably Busch beer. Not together. Jim Beam with Coke and Busch beer on its own.

What's the most difficult lesson you've learned in this business? I think that's a trick question, or a double-edged sword. Working for someone else (in the restaurant business), you can disconnect better. When you own your own place, you can close it whenever you want, but it's more 24/7.

When did you know the chef's life was for you? Basically as soon as I started cooking.