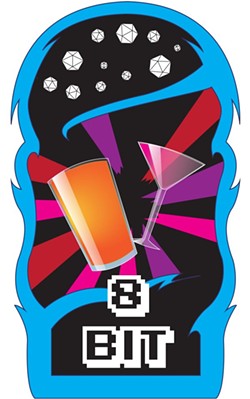 Social media fuels a lot of things in this day and age, but perhaps nothing quite like the modern-day nerd. After only four or five days on Facebook, Timothy Scherer's geek bar brain child, The 8-Bit Bar, has already garnered more than 1,000 fan page "likes." Scherer, along with the help of his significant other, Claire Franke, and a team of volunteers, launched a Kickstarter project this past Friday, March 9, to make his nerd-themed drinking dream come true. After a few days into the 34-day campaign, the project has nearly 100 backers and has raised more than $5,000 of its lofty $68,000 goal.

About nine months ago, Scherer began to hatch his business plan after being inspired by an out-of-place occurrence while bartending at the International Tap House in Chesterfield. While working on a slow Sunday morning, he decided to put Star Wars on the bar's TV screens and noticed an influx in comfort and conversation.

The 8-Bit Bar plans to provide "bits, beers, sprites and spirits," including a full menu of twenty craft beers styled after Dungeons & Dragons; fifteen to twenty classic arcade cabinets; a book and board game library, and, perhaps most importantly, the option to enjoy such sci-fi shows as Battlestar Galactica and The Walking Dead in lieu of sporting events on the big screen.

"The vision is to create a place for geeks and nerds and whoever to come together and build relationships with each other through common interests," says Scherer. "Nothing is going to replace sports or more mainstream interests, but I no longer see it as something to hide. Get out there and fly the geek flag and be proud!"

While terms such as "geek" and "nerd" often project social inadequacy, Scherer shows no signs of the sort. With an educational background in communications from the University of Missouri-Columbia, public-relations experience in the UK and a soon-to-be-completed MBA degree with a focus on marketing, he seems to possess the proper know-how to get his project off the ground.

"We just want to contribute to making St. Louis a cool place to live in by providing a place that people want to hang out in. If the response we've had thus far is any indication of that, I think we're going to get the bar going and open it. I'm very optimistic about the whole project," says Scherer, citing relationships with the community and surrounding businesses as priorities in mind.

In The 8-Bit Bar's Kickstarter project video , Scherer and Franke officially announce their intentions to occupy a space in the Cherokee District of south city St. Louis. Check out the video below for more details, and follow updates from The 8-Bit Bar Web site or Facebook page for more details.