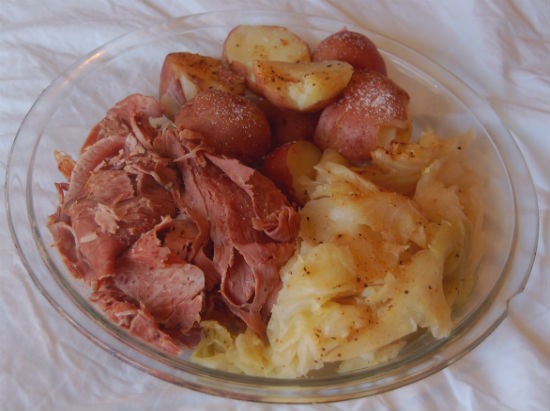 Corned beef and cabbage is far from native fare in Ireland, and it largely appears on menus to satisfy the tastes of tourists. On this side of the pond, though, the legend persists that corned beef and cabbage is authentic Irish cuisine, and, as a result, no other dish is as heralded as quintessentially Irish. At Helen Fitzgerald's (3650 South Lindbergh Boulevard, Sunset Hills; 314-984-0026), corned beef and cabbage is one of two "Irish" dishes listed under the menu category "Helen Fitzgerald's Pasta and Irish Entrees" -- the other Emerald Isle dish is "Irish Stew," and the bizarre category is rounded out with "Cajun Chicken Pasta" and "Pasta Con Broccoli." Helen's plays it safe in describing the dish, listing it as, "An Irish tradition that speaks for itself," which might as well read, "It's food: Why not eat it?" Despite its lackluster menu description, the corned beef and cabbage at Helen's is not a dish to skip.

Generous portions of smokey, tender corned beef, meaty cabbage and hearty roasted potatoes make for a robust meal that should really be separated into two servings -- an observation Gut Check made right after clearing our plate. The corned beef is thinly sliced and perfectly cooked; a knife cuts clean through it, but stab it with a fork and the fork won't fall. The cabbage retains a similar texture -- it's not limp nor tough and has more flavor than Gut Check expected. In the end, corned beef and cabbage isn't a dish we want to eat more frequently, but when the craving -- or excuse -- comes calling, we're happy to satisfy it at Helen Fitzgerald's.