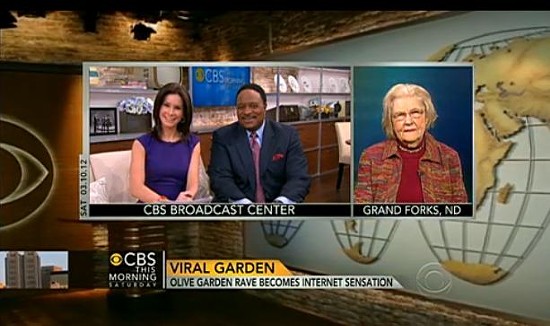 Last week, Grand Forks, North Dakota, Herald restaurant critic Marilyn Hagerty wrote a review of her town's new Olive Garden. The review went viral, first because of snark, but then because Marilyn Hagerty is a complete badass whose reaction to the whole to-do -- in sum: I'm just doing my job; get a life, haters; and now leave me alone so I can plaby bridge -- won over even the most hardened heart.

This weekend, she undertook a victory tour of sorts.

Yes, CBS interviewed Hagerty Saturday on its CBS This Morning program. Watch Hagerty continue to express her surprise that anyone would care about her review -- and also her bafflement as to what it means to go "viral," or as she puts it, "since I became whatever I am."

Meanwhile, it turns out that Hagerty's son is Wall Street Journal reporter James (Bob) Hagerty. Romensko reached out to him about his mother's influence:

I'm proud of my mom's reaction. She always told us, "Don't take any guff."

As a boy, I learned how to interview people by tagging along with my mom as she interviewed farmers and people in small towns. She noted that people tend to say their most interesting remarks after you close your notebook.