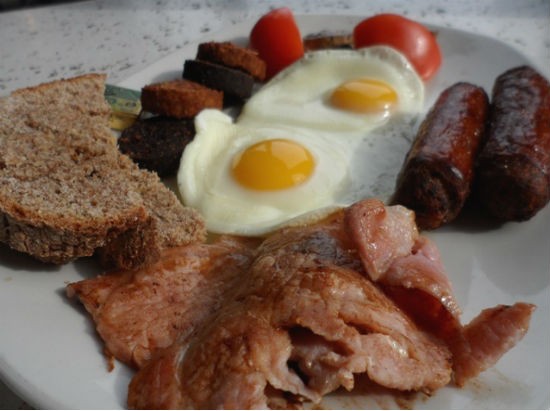 In the interest of fairness, although Gut Check has eaten breakfast in Dublin, we contacted an actual Irishman, Patrick Egan (he performs regularly at McGurk's when in town and will be teaching at the Tionol [Irish music festival] next month) originally from Coole, Gortnahoe, Thurles, County Tipperary, to learn his definition of an Irish breakfast. "Black and white pudding -- very important," he said, "Good sausages, two fried eggs, two good pieces of bacon, baked beans and brown bread or white bread toasted with Irish creamy butter."

The All-Day Irish Breakfast at Tigin Irish Pub (333 Washington Avenue; 314-241-8666) matched our Irishman's definition, even down to the number of eggs: two. The Irish sausages were rich and unctuous, and the bacon came in the form of meaty rashers. The button mushrooms and tomatoes had been grilled; the butter was notably creamy, and the bread was a hearty brown.

While there were no baked beans, the requisite black and white pudding rimmed the plate. Black pudding, a form of blood sausage, can be intense for breakfast, but Tigin's seemed more delicately flavored than other varieties -- not bland, but without the metallic tang of a darker blood sausage.

A traditional Irish breakfast, our Irishman stated, "Is worth getting out of bed for." When challenged about the time when he rises, he swore faithfully that he woke at 4:30 a.m. every day and added, "After mass, out with the frying pan."