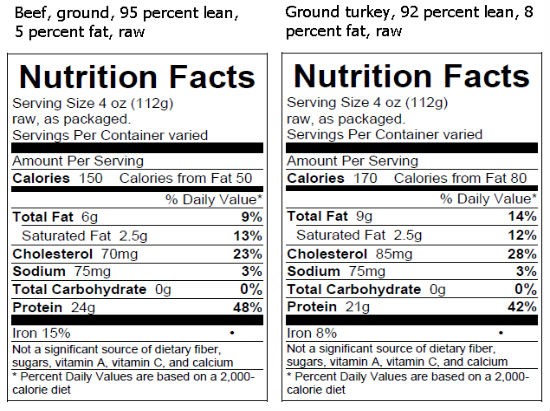 On Thursday, March 1, a new rule implemented by the United States Department of Agriculture's (USDA) Food Safety and Inspection Service requires that packaged raw ground or chopped meat and poultry be labeled with nutritional information. The rule, which was originally announced on December 29, 2010, states that butchers and grocery stores must either attach nutritional fact labels to raw meat and poultry packaging or clearly display it near the product.

The lapse in time from the rule's announcement to implementation was to give distributors time to meet the government's regulations and standards, and to budget for the labeling and additional labor required to comply with the rule.

Mariyln Tanner-Blasiar, registered dietitian with Washington University and spokesperson for the Academy of Nutrition and Dietetics, says the new rule is a service to consumers, affording shoppers the opportunity to make more conscious food decisions, "You can look at turkey, chicken, beef and pork and compare those across the board based on a serving size for raw meat," says Tanner-Blasiar. "You can compare the products side-by-side, get a better feel and make a decision."

"People don't always realize that the skin of turkey or the skin of the chicken is ground in there as well. This gives that much more clarity, " says Tanner-Blasiar. "And beef doesn't get such a bad name. It's still a good option."

Fish and seafood aren't included in the new rule, because, according to Tanner-Blasiar, "Fish is 'under' the FDA vs. the USDA."