Anheuser-Busch Due to Roll Out Test Markets Margarita-Flavored Beer 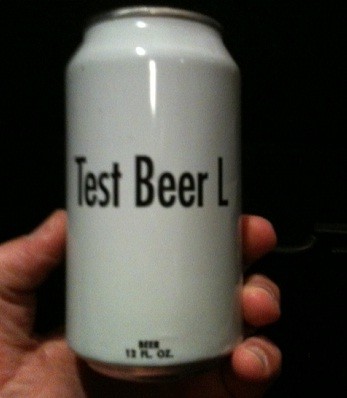 Update (again!) 4/24/2012: Evidently Anheuser-Busch/InBev's test-marketing run went well. The company's newest offering, Bud Light Lime-A-Rita is due to hit store shelves next month, in 8- and 24-ounce cans and 12-ounce bottles, according to a hot-off-the-gmail dispatch from Allison Hughes of PR firm Weber Shandwick. Hughes touts the brew as "a ready-to-drink, margarita-flavored malt beverage with a unique twist of Bud Light Lime. It's perfect for any summer occasion -- all you need to do is pour it over ice."
Having sampled the stuff back in early March (see post below), and having unsuccessfully attempted to suck down a "Beer Margarita" at El Maguey just last week, Gut Check has a request in -- ideally a Lime-a-Rita assortment pack -- for entirely unscientific samplin' purposes.
Stay tuned.
Update: Apparently the new malt beverage is to be called Lime-a-Rita. AB-InBev received labeling permission for the 6 percent alcohol brew in January.

You'd think that the brain trust at Anheuser-Busch InBev would have considered the margarita earlier. After all, the blend of tequila, lime juice and orange-flavored liqueur is one of the most popular mixed drinks in America.

But, no. When the brewery first looked south of the border for inspiration in 2007, it brought back the abomination that is Chelada -- a beer-and-clam-juice concoction that none but the most iron-gutted Cholo could keep down.

Five years later it seems that A-B InBev has finally wised up with a more quaffable brew known for now as "Test Beer L" but which will eventually be marketed as "Limerita" or "Lime-Rita."
Gut Check was at a party last weekend with one of the brewer's marketing reps when we were handed a can of the stuff. And we gotta admit that it tastes amazingly like a bona fide margarita. We've heard that the brewer is hoping to sell the drink at bars and restaurants that don't have a full liquor license and are therefore prohibited from pouring actual cocktails.

We only wish we had had some salt to sprinkle around the rim of our Test Beer L. And that we had kept the can. It's a classic.