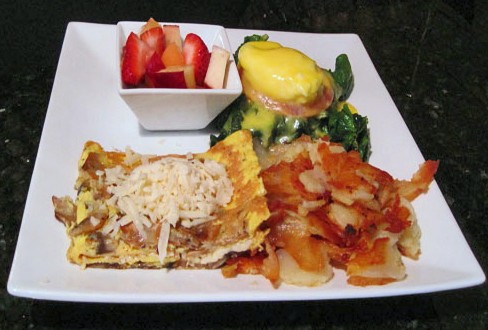 The Verdict:To brunch at Aya Sofia is to keep the party rolling from Saturday night into a cheerful Sunday morning. The dining room is usually dark and mysterious, but in the light of day, the warm yellows and heavy curtains envelop guests like a lazy-day blanket. And the music! On the chilly Sunday we slid into our spacious booth, it was upbeat disco (think Cheryl Lynn "Got to Be Real"), which was an unexpected mood- (and hangover) lifter. 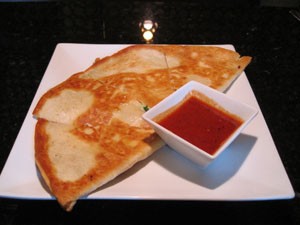 A quesadilla of sorts, peynirli gözleme brings a melty mix of feta, ricotta and goat cheeses pressed together in a huge slab of flatbread, with a side of pleasantly tangy sauce. Exotic it ain't, but it's perfectly toasted and holds up well as a leftover. (Oh, there will be leftovers.)

There's a line in an early episode of How I Met Your Mother when two dudes are out for brunch; after deeming the zucchini bread "redonkulous," one thinks out loud that the other "totally did not oversell the eggs Bene." The same could be said for our waiter, Michael, who confessed that eggs florentine was the only brunch item he ordered for months on end after he first had it, so enamored was he. Yep: The poached eggs, tomato, spinach and hollandaise were an elaborate crown for perfectly flaky biscuits that held up their end of the dish, literally and figuratively.

The omelet with mushrooms and kaşar cheese didn't fare quite as well: The mushrooms were plentiful and beefy, and the nutty-tasting cheese (the Turkish version of the Greek kasseri) was a nice counterpoint, but overall the dish was too tame, flavorwise. Next time we'll try the omelet with doner kebab (think gyro) and tomatoes. 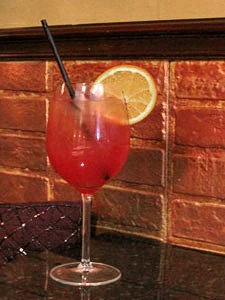 If the list of nearly 30 brunch cocktails -- coffee drinks, martinis, bloody marys, mimosas, you name it -- seems a little daunting, let your search begin and end with the "Istanbul, not Constantinople," which is to the screwdriver as first class is to economy: sooooo much better. The secret here lies in the fresh o.j.; other than that it's Grey Goose and a splash of Turkish cherry juice. Simple, and a must-order.

As far as where to sit, head for the booths. They're simultaneously spacious and intimate, and they come with pillows. Of course, such plush surroundings are a two-edged sword. You might not muster sufficient resolve to leave.