Love Castle: The Most Romantic Place in Saint Louis (And Elsewhere)

White Castle just might be the perfect dining option for a romantic Valentine's Day out. A crave case of 30 sliders for $20? What could go wrong? When White Castle introduced a fancy Valentine's Day dinner complete with table service and fancy decorations in 1991, they introduced the idea slowly, into just a few of their locations. But over the last 21 years, this brilliant marketing scheme has picked up speed, and now every single White Castle location dreads looks forward to welcoming hungry guests with open arms each February.

Gut Check typically takes the "stay home, make love" route for Valentine's Day, but as we crossed the castle threshold with our valentine (henceforth referred to as "Pete") and were greeted with streamers and the aroma of onion-y, melt-in-your-mouth sliders, we knew we'd made the right decision.

The regular White Castle uniform was replaced with upgraded, (relatively) formal attire. A host led us to our table from a podium crudely covered in red tissue paper and marked with a small White Castle logo Scotch taped onto the front.

"Do you have a reservation? Dine-in is only by reservation tonight," one of the workers informed us.

We were seated at a table with a plastic white tablecloth, some cheesy sexy bright pink LOVE napkins, foam cut-out hearts, a pink doily, a giant bottle of ketchup and one of those party-time streamer atrocities that is usually found anchoring a balloon to a flat surface (there was no balloon). In place of a corsage, our waiter had a dozen wrapped straws sticking out of his front pocket. He appeared with paper menus that bore a red "Love Castle" logo on the front.

Prices appear more expensive on paper than on the fluorescent fast food menus hanging above the cash registers or drive-thru screen. They just do. We really had no idea that a chicken ring slider with cheese costs $1.25. Regardless, we made our choice (four White Castle sliders with cheese, four chicken ring sliders with cheese, one order of fully loaded fries, one order of regular fries, a Mr. Pibb and a water), placed our order and soaked up the ambiance. 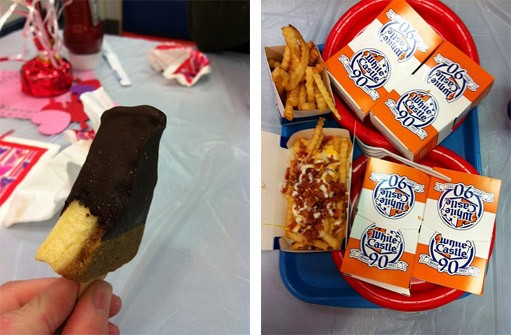 But throughout dinner, our attempts to enjoy the ambiance were...interrupted. Customers were constantly walking in and being told that "dine-in is only by reservation tonight" by the woman working the cash register. Most of these customers were teenagers; some were older women wearing slippers and sweatsuits. Throughout our time at the restaurant, the drive-thru radio static drowned out the appropriately smooth lovin' music and the steam from the steam-table hissed repeatedly, as more and more drive-thru guests ordered their take-home meals.

Our food was served in its normal packaging, but atop red paper plates with plastic forks. Everything tasted as it normally does; there were no bells and whistles. The waitstaff was surprisingly attentive. Pete decided he could use a second Mr. Pibb. "This place is so fancy tonight that when you get a refill, they throw away your glass and give you a new one," he said.

We had heard about the fudge-dipped "cheesecake on a stick" three times since entering White Castle. Our hostess, our waiter and the manager had all mentioned it as casually as they could. "Oh, and you'll get complimentary chocolate-dipped cheesecake on a stick for dessert, since you're eating inside!"

It was totally worth the hype. The cheesecakes were a bit underwhelming in size, but were delicious all the same, complete with a graham cracker crust and a silky cheesecake body.

The best part of the evening, though, was when the entrance door slowly opened behind us and a man walked in, with his eyes covered by a woman's hands behind him. She flew her hands away from his face and exclaimed, "Surprise! It's White Castle!" With huge smiles on their faces, they joined hands and walked up to the hostess station to be seated.

The brilliance of White Castle's Valentine's Day meal is that no matter what your expectations are going in, it doesn't disappoint. If you're looking for something cheesy and ironic, there's plenty there. However, if you want some sweet, innocent fun to genuinely enjoy with your loved one(s), the kitschy romance of a fast-food restaurant decked out for Cupid could be just the thing.