How to Make a Chocolate-Covered Strawberry Without a Strawberry 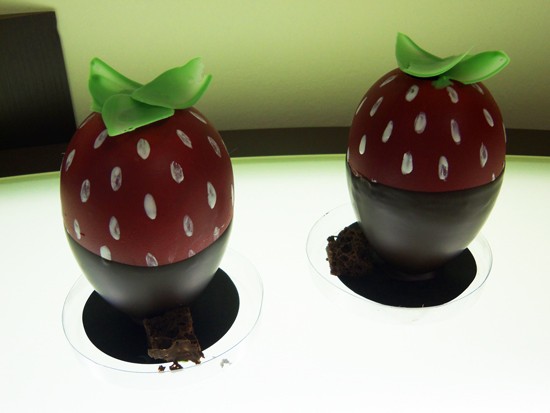 Rick Jordan has one word of advice for Valentine's Day shoppers:

"Stop asking for chocolate covered strawberries when they're out of season!" Jordan proclaims wearily from his west county chocolate store, RJ Chocolatier (14882 Clayton Road, Chesterfield; 636-230-9300). Jordan, in chocolate-making crisis mode with the Hallmark holiday approaching, has been inundated with requests for the token chocolate covered berries.

Jordan's "Les Fraises" are berries of his own creation, made from 67% Dark Chocolate and filled with marshmallow. Jordan crafts the strawberries from an Easter-egg mold, which he then sprays with white and red cocoa butter. He hand paints the "seeds" with white cocoa butter, and then fills the egg with a unique blend of marshmallow and strawberry puree. Which, for the record, uses berries that are in season.

No strawberry is complete without leaves, though, and Jordan adds the finishing touch by hand-crafting the leaves from white chocolate covered with green cocoa butter. The process is labor intensive, but provides Valentine's Day shoppers with a delicious alternative to mass-produced treats.

"All the chocolate companies order strawberries from Sysco this time of year. They're big and flavorless and white inside," Jordan explains. "Our version just tastes better. "

Jordan plans on displaying the berries in the front of the store, sitting atop hand-crafted "dirt" that he makes by overcharging liquid chocolate in CO2 cartridges, spraying it into a container, vacuuming it, and then letting it set in a freezer.