What the Hell is Bridge Mix, and Why Is It in Our Off-Brand Raisinets? 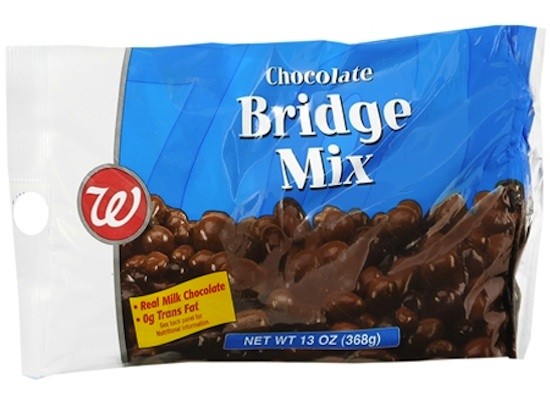 Walgreens has announced a voluntary recall of 13-ounce packages of its store-brand chocolate-covered raisins because they may contain peanut, almond and soy ingredients. Click that link to see the UPC data for the offending packages, which don't appear to have been distributed to Missouri or Illinois, but you can never be too careful.

How did Walgreens' off-brand Raisinets end up with peanut, almond and soy ingredients? Well, some of Walgreens store-brand "Bridge Mix" got mixed up with the chocolate-covered raisins.

It was at this point that Gut Check frowned. What the hell is Bridge Mix?

First, Gut Check turned to the scrapbooks in which we've pasted decades' worth of Omar Sharif's bridge column -- oh, like you haven't done it, too -- seeking any references to this bridge mix.

Then, we consulted the internet and were shocked to discover that Dictionary.com indeed has an entry for "bridge mix":

Definition: a mixture of various chocolate-covered candies, nuts, raisins, caramels, etc. Etymology: from the handiness of such candies during a bridge game

Sorry, but we have to call bullshit on this etymology, which reads as if it were written by some high-school intern. Why is this particular mix of chocolate-covered items so handy during a bridge game? Isn't any bite-sized snack by definition handy? Is a bowl of, say, dry-roasted nuts too low-class for bridge?

What about Doritos? Doritos are delicious. And before you say, "You don't want to get grease all over the playing cards," let me just point out that greasy playing cards are no worse than playing cards stained with half-melted low-rate milk chocolate.

User "900hp" titled his four-star (of five) review "THE BOMB." Pros? "CHOCOLATE." Cons? "Portion of bag not occupied by bridge mix." Mr. 900hp also provided this pithy comment: "You can try to stop eating it, if you're into futile pursuits."

Meanwhile, "skesketobeske" of Wisconsin gave Walgreens bridge mix only one star: "Might as well have bought chocalate covered peanuts as there was NOTHING but that in the whole bag of Bridge Mix Will buy the better brand from now on."

Yet as we studied this product page further, entranced by its mere existence, let alone the details it provided, we suddenly found our doubts about bridge mix returning anew.

Look at the packaging. It doesn't simply say "Bridge Mix" is says "Chocolate Bridge Mix," implying that there might be other, not-chocolate bridge mixes, thus invalidating the Dictionary.com definition and plunging us back into the depths of ignorance.

Thus we must conclude with a question to any bridge players among our readership: The fuck? You eat this stuff?