Sloup's 23rd event comes perfectly timed at the end of National Soup Month. Read on for details as Gut Check catches up with co-founder Maggie Ginestra to see what Sloup's been up lately and to get an idea of what to expect for Sloup 23's festivities. 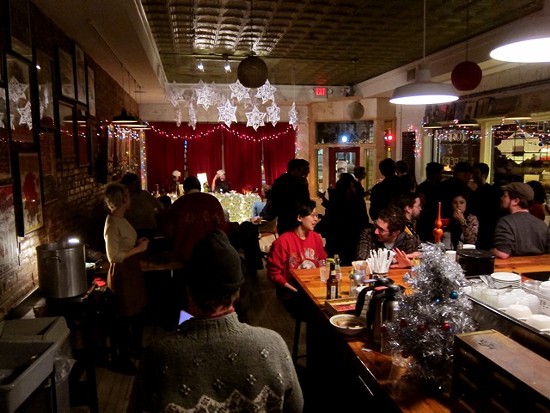 Sloup, a local monthly soup dinner that helps to raise funds for artistic projects, has garnered honors such as Best Arts Organization in the RFT's Best Of awards in 2010 as well as the 2010 RFT MasterMinds Award, and it's still going as strong as ever. Haven't heard of Sloup before? If you're behind on the times, it's not too late to get involved.

After a brief holiday recess, Sloup is back, and it's bigger and better than ever. Rather than having a soup dinner and project proposals presented at a single remote location in typical fashion, multiple hosts across the city simultaneously volunteer their soup cookery skills for the cause. The process, designed in collaboration with Francesca Wilmott of Los Caminos, involves vote tallying the next day and later reflection of the overall experiences.

To participate in Sloup 23: The Science of Sloup, simply RSVP (or in some instances, just show up) to one of several Sloup dinner locations during the evening of Sunday, January 29. Each meal costs $10 a person, with proceeds to benefit the chosen proposal. For information on available locations, ranging everywhere from Los Caminos on Cherokee Street to Wiegand Studios in Chesterfield, visit Sloup's Web site. 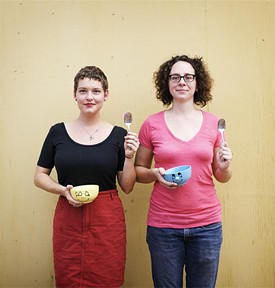 Mabel Suen: What has Sloup been up to since the RFT's last report in 2010?

Maggie Ginestra: Since Summer 2010, we've solidified and thrived as a roving program, hosted several Sloups with the Contemporary Art Museum St. Louis, met a lot of generous and innovative chefs, had a caravan Sloup outside the city, wheelbarrowed a soup up Cherokee Street, and awarded a grant to an artist every single month up until our recent holiday hiatus. We've hit a natural plateau; Thus, 2012 is going to be a year of experimentation and collaboration.

What are some projects Sloup has funded recently? What have recipients done with the dough?

Maggie Ginestra: Our last two project winners were Issue Magazine and Rats and People Motion Picture Orchestra. We were thrilled when the Rats and People Motion Picture Orchestra won a grant to purchase a projector so that they'll be able to pop up and screen the film they're soundtracking anywhere. They've agreed to return to Sloup to play a short film with their new gem in March at Nebula Coworking.

How many separate Sloup dinners will be going on this Sunday?

Maggie Ginestra: So far, seven open hosts have committed, and Amelia and I have heard tell of a few private Sloups. We are hoping for surprises, too! Bridge Tap House & Wine Bar is building Sloup into its service for the night -- no RSVP required. Chef Clara Moore and couple Kyle and Emma Klues are opening their homes for the night. Two art spaces, Los Caminos on Cherokee Street and Don F. Wiegand Studios in Chesterfield, as well as an emerging artist discussion group called Thinking Art STL, will host. And the reverend at St. Stephens Church in Ferguson is making a soup to be served in their parish hall. More info direct from these hosts, like start times and how to RSVP, are on our blog, along with how to submit a proposal to win the grant this night will generate.

What are you most looking forward to for Sloup 23: The Science of Sloup?

Maggie Ginestra: Amelia and I are hopeful that many people will Sloup on Sunday who never have before, thus growing Sloup's potential to generate artists' grants of motivating scale, and that hosts will have an easy fun time hosting while encountering interesting difficulties that inform Sloup's future practices. We hope they invest in and enjoy documenting what happened at their Sloup. We are excited to attend Sloup as guests and vote for the first time and to hear all the recipes chosen that night. We get to camp out the next morning at Local Harvest Cafe and collect each host's Sloup packets as they slowly, suspensefully reveal the size and winner of the grant. Feel free to join our stakeout!