Crab Cake and Heartbreak at BrickTop's 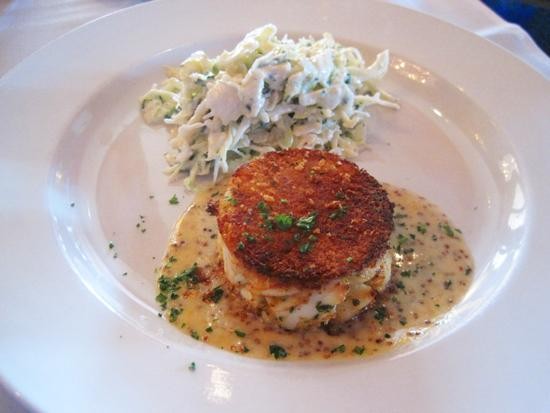 When I went to bed last night, several hours after my hometown Baltimore Ravens' agonizing loss in the AFC Championship Game, I didn't feel too bad. Wine, Tater Tots (my comfort-food guilty pleasure) and a couple of episodes of Archer had helped to dull the pain.

When I woke up this morning, I felt once again like I'd been punched in the gut. Since I couldn't mourn collectively with my fellow Baltimoreans, I decided to seek out a taste -- however fleeting -- of home.

If, you know, I could also visit a new restaurant that I needed to try anyway, that would be ideal.

Which is how I ended up at BrickTop's (1701 South Lindbergh Boulevard, Frontenac; 314-567-3600), the two-month-old restaurant at Plaza Frontenac, eating a crab cake.

BrickTop's is a small (six -- soon-to-be seven -- locations) upscale chain. Even at lunch, when I visited, the prices aren't cheap: most lunch-portion entrées are $18, sandwiches range from $11-$17 and even an entrée-sized house salad will set you back ten bucks.

The crab cake entrée -- or as the menu calls it, simply but grandly, "The Crab Cake" -- is one of the $18 lunch plates. It brings a single cake in a pool of whole-grain mustard sauce with a side of cole slaw.

Though priced higher and plated more elegantly than the traditional blue-collar Baltimore crab cake ever is, BrickTop's version does share one very important quality with the apex of the dish: It's about the crab.

The cake isn't big -- its circumference is bigger than a good-sized diver scallop, but definitely an appetizer portion -- but it's plump with jumbo lump crab meat and little else. The top and bottom of the cake are dusted with bread crumbs to give it a little crunch, but otherwise there's nothing to distract you from the tender, lightly sweet crab meat.

The mustard sauce is very mild. if it doesn't especially improve the dish, it doesn't detract from it, either. The quality of the crab meat might justify the dish's $18 price, relative to the portion, if the cole slaw didn't seem like such an afterthought.

Then again, this is Plaza Frontenac. Around this part of town $18 is a bargain.