Gut Check Takes a Pie in the Face 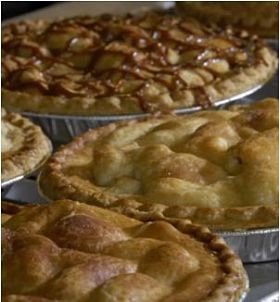 This Monday, January 23, marks an important national holiday: National Pie Day. This great festival is the brainchild of the American Pie Council -- and how did we not know that such an organization existed, devoted exclusively to the celebration of pie? From this day forward, we resolve that all the spare change we find in the nooks and crannies of our car and couch will go toward our American Pie Council Membership fund ($40 lifetime for amateurs).

In celebration of National Pie Day, Eckert's Country Store and Farms -- Riverfront Times "Best Pie" for 2011 -- will be offering a special buy-one-get-one-free pie deal, featuring fourteen different types of pie. Next door, Eckert's Country Restaurant will be selling all its desserts for a dollar. Joy! Joy! Joy!

Except...except...it turns out we made a grievous error in our citation for "Best Pie."

Back in September, we had written that one of the great attractions of Eckert's pies is that "the apple and peach filling come from the same orchards in which you just spent the afternoon." A month or so later, the Belleville News-Democrat came along and burst our bubble. Roger Schlueter, the BND's Answer Man, revealed that the fillings of Eckert's fruit pies do not, in fact, come from Eckert's fruit trees. They come from a fruit supplier.

"We have to rely on a little support from the food industry because now food safety is such a concern," Eckert said.

"I think some of that has challenged the small retailer to go to sources that are more systematic versus us cutting and peeling every apple. There's a lot of steps involved in that that could snag you up. Years ago, it was, 'Oh, tastes good! Let's sell it!' Now consumers and business owners are very sensitive. One faux pas or one mishap could be treacherous."

(The article is no longer available online, but you can see a summary here.)

Like a freshly-bit-into pie crust (a good one anyway), we were shattered. That's what happens when you make assumptions about apple orchards that sell pies on the side, pies, we might add, that come from a bakery case without packaging or a list of ingredients.

So while we were on the phone with Eckert's about the details of National Pie Day, we thought we would inquire, since it's been a few months since the expose, whether the provenance of the fruit fillings has changed. According to Angie Eckert, it has not.

"We're not able to keep up with the volume," she explains. "We wouldn't have enough fruit to make pies to sell and still have fruit to pick. It would be a totally different business model."

Eckert also points out that the Illinois apple season lasts a mere two months, not enough time to produce a sufficient quantity of apples to fulfill the demand for Eckert's pies. She emphasizes, though, that even though the pies are assembled by a St. Louis commercial food supplier, they are baked on the premises, in a ferris wheel-style oven that holds 25 trays at once.

"It's convection style baking," she says. "It makes everything better."