This is part three of Stacy Anderson's Chef's Choice profile of Jason Tilford of Milagro Modern Mexican. Part one can be found here. Part two, a Q&A with Tilford, is published here. 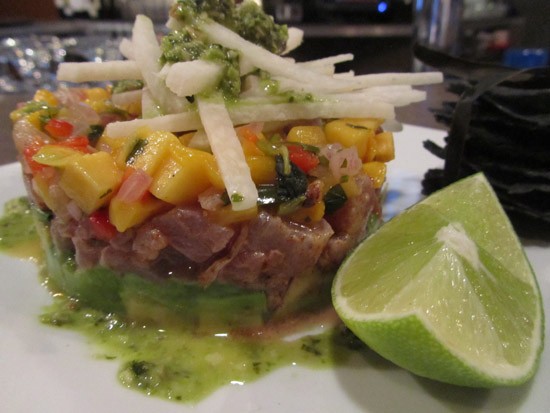 A big part of chef Jason Tilford's history as a chef and his current work at Milagro Modern Mexican (20 Allen Avenue, Webster Groves; 314-962-4300) is bringing the freshest and most authentic ingredients to his customers. The key to some of his best dishes is that they're often just as healthy as they are tasty. This is what inspired his ceviche; it's something he's not only proud to serve his customers, but himself and his family as well.

Tilford's son Julian watches with wide eyes as Tilford marinates the tuna and dices an avocado with the swiftness and skill of someone who's done this a few times before. Tilford works dutifully to layer the ceviche in the ring mold, and carefully laid strips of jicama (a Mexican root vegetable) atop the fresh fish and salsa. Served with fresh tortilla or plantain chips and a margarita on the rocks, this dish is the perfect example of the lighter side of Mexican fare that chef Tilford hopes to bring to those who visit Milagro.

And when Julian was asked whether he liked ceviche? He simply gave a sheepish grin and a nod. 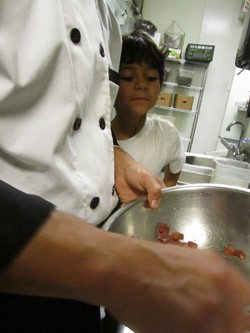 Place the tuna in a small bowl and mix with the lime juice, salt and hot sauce. Set aside to marinate. Dice the avocado and press into the ring mold on a plate. Season with a pinch of salt and sprinkle with the chopped cilantro. Place the tuna mix on top of the avocado and press to the sides of the mold. Top the tuna with the mango salsa and carefully remove the mold. Garnish with the jicama and pesto. Serve with fresh tortilla chips or plantain chips.

Place all ingredients in a food processor and pulse until ingredients are chopped and pesto has an almost smooth texture.