January is National Soup Month, which makes sense, considering the first month of the year is typically marked with below-freezing temperatures, snow and slush. What's better than a delicious, hot bowl of soup on a chilly day? A delicious, hot bowl of soup that you don't have to make -- that's what. This January Gut Check will revisit some of our favorite hot soups to help guide your belly through this month-long soup celebration. 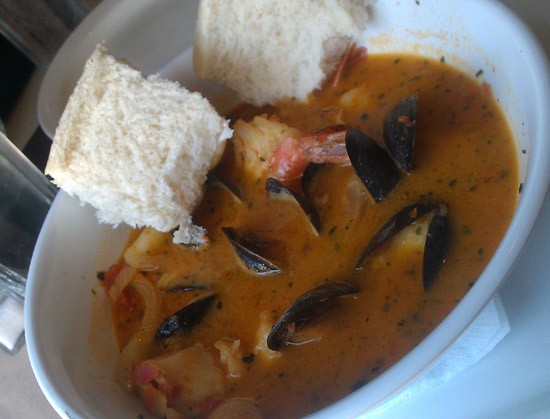 Any restaurateur who chooses Middle America to bring to life a French/cajun-themed menu has an uphill battle ahead. We've all seen (or, more accurately, smelled) the rivers that straddle this city, days away from either ocean, rendering even the most highly reputable STL joint's "fish guy" highly suspect.

It initially looks less than promising. A handful of mussels and some other mysterious hunks of sea creatures float around in what at first appears to be a thin anemic broth, with an afterthought of dry bread perched on the side. Groan.

It turns out the mussels are tiny but plentiful; the shrimp have the opposite problem. They're fat and tasty, but came just two to a bowl. The chunks of fish fill the role that noodles so often do: nice, might be missed if absent, but ubiquitous. The fish acts as filler rather than lending any complexity. But the real surprise is the broth. The soup itself packs more flavor than the bisque-like bases that other seafood stews have in comparison. And, most notably, it's seafood in the Midwest that doesn't taste like seafood in the Midwest. Score.

Soup's On Try This Now