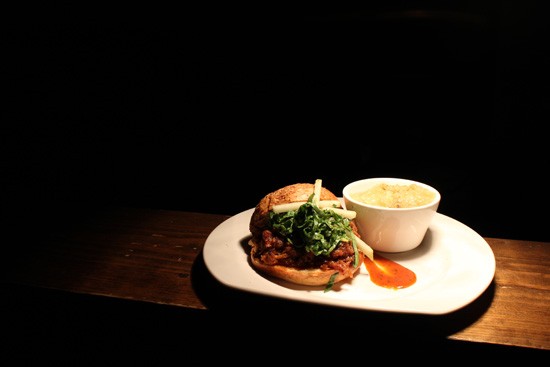 This week, I visit the Crow's Nest (7336 Manchester Road, Maplewood; 314-781-0989), the successor to the late, lamented Bleeding Deacon Public House. Does the new spot surpass the original? A sneak peek at my review after the jump.

When the Bleeding Deacon Public House closed suddenly late last year, St. Louis lost its first "gastrodive." I don't know who coined the term gastrodive, and I'm not about to embark on an Oxford English Dictionary-style exhumation of the earliest citation. I never much liked gastropub, its direct Gourmandese-language forebear, which carries such a strong whiff of pretension: "This is what pub fare should be." But for my money, the root on the term's suffix side is more egregious -- and far older, "dive" having been co-opted so long ago that the elitists who propagated it aren't even called elitists any more. (I'd argue that hipster is a textbook example of the punishment fitting the crime.)

At any rate, regardless of the derivation, a gastrodive is by definition free from expectations. That a grungy south-city joint such as the Bleeding Deacon would offer anything besides TJ's Pizza was in itself a win. That it served up tasty meat loaf, fish and chips and sandwiches was cause for celebration.

How far out of the Bleeding Deacon's comfort zone does the Crow's Nest venture? Visit the RFT restaurant page late this afternoon or check back here tomorrow morning to find out.