This is part one of Stacy Anderson's Chef's Choice profile of Jason Tilford of Milagro Modern Mexican. Part two, a Q&A, will be published tomorrow, and part three, a recipe from Tilford, will be available on Thursday. 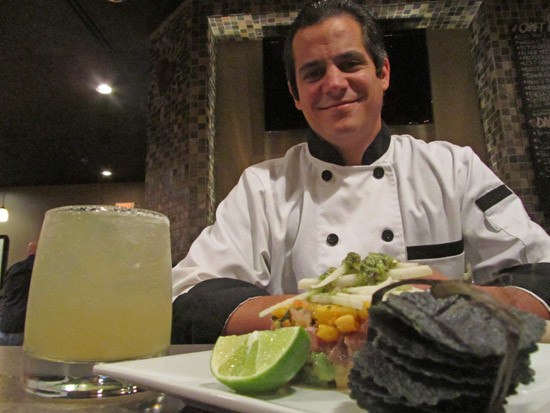 Upon first meeting, chef Jason Tilford is a man of few words. He answers questions about his life and career in St. Louis succinctly and to the point with a genuine splash of modesty. However, walk into his kitchen at Milagro Modern Mexican (20 Allen Avenue, Webster Groves; 314-962-4300) and it's a different story, one he's more than happy to tell if his hands are busy with fresh Mexican ingredients and a great idea for lunch.

Tilford moved around a lot growing up, but he never missed a meal made by his mother. He knew that he felt at home in the kitchen but was truly hooked after settling in St. Louis in the early '90s. In his time here, he's consulted for a variety of restaurants, including EdgeWild Restaurant and Winery, Mile 277 Tap and Grill, Kota Wood Fire Grill, Barrister's and Tortillaria, to name a few. However, it was in April of 2010 that he helped open a restaurant that worked to redefine what St. Louis thought of Mexican food.

"We wanted to bring a freshness to what Mexican food can be," says Tilford of the venture he and his brother Adam took on when opening Milagro Modern Mexican. This was a long time coming (the Tilford brothers planned the concept for two years before settling in Webster Groves) but worth the wait to do it right. "We both grew up in Webster and know that it's a tight-knit community that supports local businesses," says Tilford. "Every night, we have people in that we know. It adds to the experience of owning a restaurant."

When asked about the initial reception when they opened their doors, Tilford says, "We knew we weren't for everyone, but the people that appreciate us really appreciate us."