While these days it seems like those who eat offal are adventurous gourmands, this wasn't always the case. Organ meats are humble by nature, the odd science-project leftovers after the animal has been broken down into the more obviously appealing roasts and steaks. With clever cooking techniques, though, these cheap "nasty bits" can become tasty, even highfalutin' dishes. In No Guts, No Glory, Gut Check visits local places serving up the offal truth.

"While I was researching brains, I found out it was an exclusive St. Louis thing, which I thought was really cool," says Hippchen.

Hippchen prepares his brain sandwich in the traditional poach, dredge and fry method. The raw brains that he pulls from the fridge look like zombie slop. It's not until he poaches it that it firms up into its familiar "lobe" form. 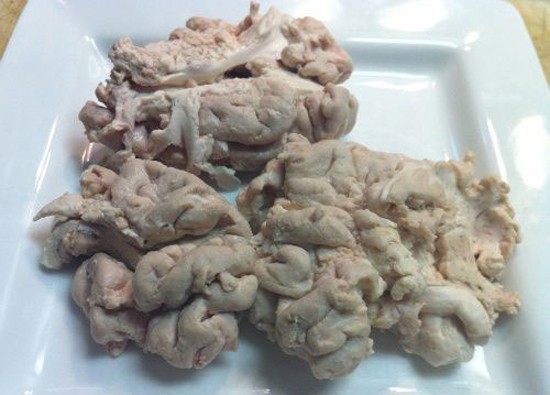 "You have to clean them up a bit now, take out all of the weird shit," explains Hippchen as he removes connective cord and tissue from the brains.

He plops the brains in some buttermilk, dredges them in flour and then disappears to the bar for a shot of soda water to make some "ghetto tempura." A short swim in the deep fryer produces benign-looking, pale golden brown nuggets which could be mistaken for fried chicken fingers. After smearing a generous dose of sambal (chile sauce) on a toasted brioche bun, he adds the brains and tops them with a jaunty sunny-side-up egg.

Zombies love brains, but for humans it's a matter of taste. Hippchen's brain sandwich is crisp with the unmistakably intense richness and soft slurpy insides of cooked brains. The sambal adds a vinegary foil to the fattiness of the messy egg yolk and brain which, in the end, will inevitably drip and drool all over your face and hands making you look quite zombie-esque indeed.