The Five Most Anticipated New St. Louis Restaurants of 2012

To be frank: This was an odd list to compile. If 2012 continues the trend begun in 2011, St. Louis will welcome many new restaurants over the next twelve months, so singling out only five of them as the "most anticipated" seems silly. What's more, many of the restaurants that will open in the new year aren't even rumors yet, let alone confirmed news, so a year from now, we might wonder how we couldn't have anticipated this or that smash hit.

Still, we do know some of the restaurants slated to open their doors in the coming months, and for various reasons, these five stand out among them.

- Arcelia's (2001 Park Avenue): Can new owner Pat Shelton resurrect the spirit of the once- beloved Lafayette Square Mexican restaurant? When Gut Check spoke with her this summer, she promised us a return to the restaurant's roots, including the return of former employees -- and the granddaughter of late founder Arcelia Sanchez.

- Medianoche (8135 Maryland Avenue, Clayton): Owner Mike Randolph has established a stellar track record with the Good Pie and Half & Half. So perhaps his plan to run a second restaurant, serving contemporary Mexican cuisine, out of the exact same space as Half & Half, switching from it to Medianoche between lunch and dinner service, isn't as crazy as it sounds. It certainly is intriguing. 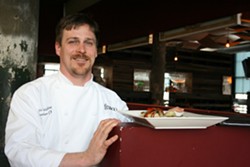 - Nico (6525 Delmar Boulevard, University City): Tom Schmidt describes Nico, which will take over the former Brandt's space in the Delmar Loop, as the younger brother of Franco, his terrific French bistro in Soulard. Look for "more approachable, more accessible" French fare (at a lower price, too) overseen by Franco executive chef Chris Williams.

- Pastaria by Niche (Location TBA, even though it's the worst-kept secret in the St. Louis food scene): As its name suggests, the next-entry in Gerard Craft's restaurant empire will feature a "very focused" menu of Italian pasta dishes as well as antipasti and a few roasted meats. Craft's track record at Niche, Taste and Brasserie by Niche means diners will walk into his new place with expectations very, very high.

- Root (1135 South Big Bend Boulevard, Richmond Heights): Brian Hardesty -- formerly the chef at Terrene; currently the operator, with Joel Crespo, of the food truck Guerrilla Street Food -- took over Nosh a few weeks ago and then promptly announced that it would become an entirely new restaurant, Root, serving dishes and employing techniques from America's past. It's an ambitious concept, but perhaps boldness is exactly what this seemingly cursed space next to Starrs needs.