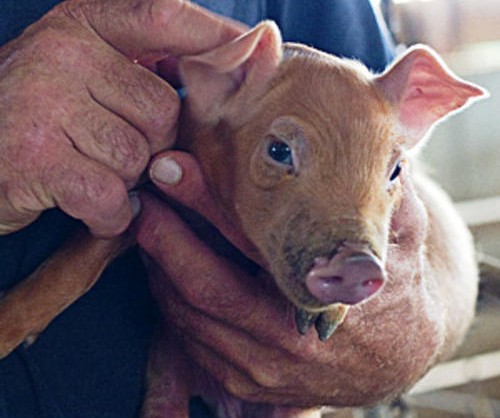 File under: "Things You Were Already Afraid Of But For Other, More, Shall We Say...Visceral Reasons ."

This just in from the U.S. Department of Agriculture's Food Safety and Inspection Service: Undercook those holiday chitlins at your peril. (Or, more precisely, at the peril of Grandma, Gramps and Baby Snookums.)

You see, it's possible that big old plateful of pig intestines you're preparing to tuck into contains the bacteria Yersinia enterocolitica, which, the USDA informs us:

...can cause yersiniosis, a diarrheal illness in humans. Yersiniosis peaks in winter and is most common and severe in children under four, with adults over 85 being the next most affected age group.

And in the event that the looming threat of yersiniosis doesn't make a sufficient dent in your appetite, the food-safety experts remind us that chitlins might also harbor Salmonella and E. coli.

Of course, the authors of the USDA's news release don't call chitlins chitlins. They refer to them as "chitterlings."

In Gut Check's experience, people who refer to chitlins as chitterlings don't, as a rule, eat chitlins (or chitterlings, for that matter).

Which is kind of depressing when you think about it. But what are you gonna do?

If you're the USDA, you're gonna tiptoe around the cultural elephant in the room by explaining that "[c]hitterlings are a traditional meal around the New Year's holiday if you're really old, from the South, African-American or, more than likely, all of the above."

If you're Gut Check, you're going to hunt down the tastiest-sounding recipe for pig guts you can find, inspiring yourself with the words of the great American chef James Beard, who had an abiding love for many such delicacies and who, it should be noted, lived to the ripe old age of 81. (And no, it wasn't chitlins that killed him; it was heart failure. Dude did love to eat.)

Here's Beard, who doubles as a dandy exception that proves the chitterlings/chitlins rule:

Chitterlings are the small intestines of the pig and are considered a great delicacy in the South when cooked and served with turnip greens or black-eyed peas. They must first be freed of fatty particles and then thoroughly washed in several changes of water before cooking. Add seasonings to the cooking water -- onion, herbs, and garlic -- if you like. Cook 3 or 4 hours. Sometimes chitterlings are eaten boiled, along with greens, grits, or other accompaniments. Sometimes they are dipped in batter and deep-fried. However they are done, they are a welcome change and resemble many European dishes made with the same ingredient. They are as old as history and not entirely exclusive to the South, for the intestines of pork make the famous French sausage known as andouillette. Recently I stopped at a huge shop in Los Angeles advertising "Buckets of Chitlins." They were wonderful. You can eat there in the garden or you can literally carry away paper buckets of them.

Dipped in batter and deep-fried? Sounds about right to Gut Check! And if we can lay our hands on a paper bucket, so much the better.

Here's the deal with chitlins, though: You have to clean the crap out of them. And when we say "crap," well, we'll just assume you know what we mean.

Or maybe, just for safety's sake, we should turn over the ol' Gut Check keyboard to the USDA (don't worry; we disinfected it first):

"As with preparing any raw meat or poultry, cleaning and cooking chitterlings in household kitchens can create a messy environment in which bacteria can easily spread to kitchen counters, tables, utensils, and even baby bottles and pacifiers," said Under Secretary for Food Safety Dr. Elisabeth Hagen.

There follows a series of bullet points involving hand-washing, cutting-board-bleaching, pre-boiling and regular-old boiling. And a link to a USDA "fact sheet" on yersiniosis and chitterlings.

Interestingly, however, neither document provides even the slightest clue as to how one ought to go about the actual process of cleaning one's chitlins. (Gut Check did come away edified by the knowledge that "the name 'chitterlings' comes from Middle Old English or Middle High German," so that's something.)

Fortunately, being, as we are, all Internetty and stuff like that, Gut Check was able to locate some guidance in the intestine-scrubbing department. And in the process of hunting down said instruction, we found an awesome recipe for "the famous French sausage known as andouillette" of which the great James Beard writes.

Andouillete is, as you might suspect, derived from the better-known-thanks-to-Cajun-food's-popularity andouille sausage. Literally it'd be a petite version of andouille, and once upon a time it probably was. But these days andouille is stuffed with more widely accepted bits of pork, while andouillette remains true to both sausages' gutsy origins; strictly speaking, it consists of a sausage casing that's stuffed primarily with sausage casing. In other words: chitlin city.

Please permit Gut Check a brief digression (hell, you've made it this far) on the nature of beast: All this washing and bleaching and boiling and such is due to what is perhaps the most distinguishing -- and inextricable -- characteristic of the chitlin: It stinks. Like shit. That's because before it found its way into your kitchen, its sole function inside the pig was to take partially digested food, absorb all the nutritious parts therein and turn what's left to, well, to shit. Even the white-gloved food-safety patrol at the USDA acknowledges this fact, if only in passing: "Chitterlings have a pungent odor while being boiled."

OK, just one more little side note, and then it's on to the andouilettes, we promise. You see, experts seem to disagree when it comes to the precise definition of the term "chitterling."

James Beard, you'll recall, is pretty unambiguous in the above-quoted passage. Says he: "Chitterlings are the small intestines of the pig...."

The USDA is equally assertive: "Also called "chitlins," they are the large intestines usually of swine (hogs)."

The American Heritage Dictionary sides with Beard: "The small intestines of pigs, cooked and eaten as food." Ditto the Food Lover's Companion. We'd pull down our Random House Unabridged, but we can't reach it and it's big and we're usually too lazy to put it back when we're done so it tends to sit on our desk, which is cluttered enough already.

The recipe below -- we're nearly there, truly we are -- specifically calls for the large intestine yet is titled "Chitterlings of Troyes." But the fellow who wrote it was a Frenchman and the French title is "Andouillettes de Troyes," so Gut Check's pretty sure "chitterlings" in this case is a mistranslation.

Point being that we all agree that chitlins stink, which can only mean the large intestine stinks more. And if you Google "andouillette" (allow me!) you'll quickly discern that 1) either one loves it or hates it and 2) the haters vastly outnumber the lovers. (Here's a representative viewpoint from Camp 1 and Camp 2.)

Our recipe comes from chef Charles Ranhofer, who was born in Saint-Denis, France, in 1836, moved to the U.S. at age nineteen and for more than three decades headed the kitchen at the legendary Delmonico's Restaurant in Manhattan.

Ever hear of lobster Newberg? Ranhofer invented it. He also made a mean andouillette, judging from this recipe from his treatise on cooking, The Epicurean. (The entire book, whose full title is , is still in print, but Gut Check cribbed the recipe from this awesome-looking site called ChestofBooks.com, which some thoughtful person appears to have created in order to share "free books" with the world.

Note that right out of the gate, Chef Ranhofer cautions the would-be charcutier about the most crucial step in the andouillette-making process...

Chitterlings require a great deal of care in their preparation; in fact it must be remarked that the quality depends entirely upon the proper cleansing of the bowels.

throat fat taken from the pig

Take some pork bowels, removing the stomach and the easing, only using the large intestine, wash this in cold water.

Turn it inside out in such a way that the fatty part is inside; in order to accomplish this easily, take a stick a yard long, place the end of it in three inches of the narrowest end of the pipe and run the pipe entirely on the stick, keeping it all the time in its original place; when it is all on let slide by pulling it slowly on the first part, that is on the stick, and the pipe will turn over all alone.

Now clean it in lukewarm water acidulated with vinegar, changing it three times and leave to soak for three hours; rub it once more through the hands so as to remove all the remaining gluey parts.

Put aside the uncrimped part of the pipe which will answer for wrapping purposes and set the remainder in a put full of cold water; heat until the pipe becomes a little hard, not letting it boil. Afterward cut the pipe lengthwise, lay it perfectly flat spread it out and clean it thoroughly; cut it into thin strips as long as possible without separating the parts.

Cut also into the same lengths the crimped part of a calf's crow suppressing the fat center.

Cut up about a pound and a half of salt pork into strips.

Now lay all these out on a table in the proportion of two-thirds of the bowels and the other third composed of crow and throat fat; dress in oblong shape, being careful that the left side has the least possible loose ends; the size to be about eight to nine strips.

Season this laid-out part with a minced seasoning composed of three onions, three shallots, half a handful of very finely chopped parsley, pepper, allspice, nutmeg and mignonette, strewing it over the whole.

Pass a strap made of two six inch lengths of birchwood fastened together with an inch length of string through the opening on the left end, and turn it in such a way that the chitterling has the appearance of a twisted cable.

Cut the pipes laid aside for wrapping purposes into sixteen-inch lengths, have the fatty part outside, operating the same as when turning over the gut itself, placing the gut one inch below the hole; run the chitterling through, being careful to keep the first end at the extremity of the chitterling; tie both ends.

Although this may appear very easy, yet it is a, difficult operation to perform for the first time and requires a certain practice.

How to Cook the Chitterlings

To have them very white, cook in a stock of half milk, half water, one onion, thyme, bay leaf, salt and lemon; leave to boil slowly for about three hours.

In order to give a finer appearance, restuff the chitterling after the first cooking in an uncrimped pipe and leave on a slow fire for fifteen minutes, keeping it near boiling point.

Now lay it in a napkin and press between two boards with weights on top.

Score the chitterlings on both sides about three-sixteenths of an inch in depth. Baste with oil or butter, broil on a slow fire and dress on a dish over a little clear gravy.