Gut Check will do anything to get smarter. From eating the recommended amount of fish to keeping our gray matter's precious fatty tissue lubricated to challenging our brainsicles with crossword puzzles and chess, we'll jump at the chance to gain (or, more likely in our case, attempt to preserve) even the smallest fraction of an IQ point. But will slogging down can after pricey can of so-called brain tonics really make us geniuses? We doubt it, but we were willing to plunk down the cash money and put in the hours to find the answer.

It got us imagining a smarter world. Taking a cue from that app where you have to solve math problems to avoid texting while drunk, what if we had to solve for the square root every time we opened the fridge? What if our cars made us spell four-syllable words before we could turn the key in the ignition? What if, instead of working on boring projects, preparing PowerPoint presentations for our coworkers to sleep through, we were expanding our minds in a measurable way every day? What if we lived in a world where the satisfying crack of an aluminum can was the international symbol for impending mental heavy lifting? All right, y'all, we're gonna down this dendrite crack and then do some serious thinking! 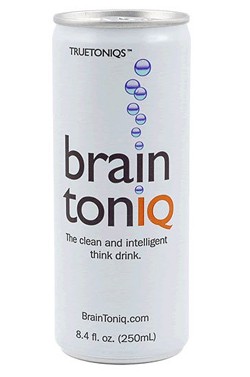 First up, Brain Toniq, purchased from the all-too-healthy people at Golden Grocer for a mere $3. As an ADD-addled pseudo-creative type, we've long sought a $3 cure to our brain's (considerable) shortcomings. Would this "clean and intelligent think drink" in its crisp white packaging hold a candle to that old standby, our eighteen-cup-a-day coffee regimen?

The taste is pleasing, sophisticated and unmistakably smacks of health, which may or may not be due to the twenty grams of agave nectar, Siberian ginseng, rhodiola root powder and some chemical compound that purports to stimulate production of acetylcholine (a common ingredient in Alzheimer's medication). It's oddly relaxing to drink, reminiscent of the first sip of drank (click 'n' scroll down), the purple anti-energy beverage composed of rose hips, melatonin and valerian root that theoretically combine to "slow your roll." (Works great when imbibed in tandem with muscle relaxants!)

The carbonation is minimal and pleasing, and the drink has that thin-fullness so familiar to energy drinkers such as ourself. The flavor is sophisticated enough to momentarily lull one into imagining that this 80-calorie beverage is actually a lovely cocktail.

Next up, Nawgan. Nawgan was developed by a neuroscientist, and the company has ties to St. Louis. Unlike Brain Toniq, Nawgan is available in three palate-teasing flavors, two of which are utzed with 100 milligrams of caffeine. Tarocco Orange, one of the utzed varieties, fails to live up to the flavor promise of its exotic-sounding name. Slightly medicinal, but mostly just boring orange, this stuff's a chore to swig. On the other hand, Berry (caffeine free) is delicious, particularly if you're a Smarties fan. The caffeinated Red Berries flavor doesn't taste quite as yummy, though we're at a loss to explain precisely how that can be.

Nawgan offers a memory test to "prove" that your beverage is fulfilling the promise of its packaging. We dutifully tried it twice, once pre-Nawgan and a second time after chugging a can o' Berry. The results were mixed: The first go-round, we were so floored by the fact that they wanted us to pay attention for 135 seconds IN A ROW while a bunch of numbers flashed across the screen that we started answering incorrectly just to get it over with sooner. The second time we again lost interest halfway through, but we did score one point higher. We're chalking that up to the fact that we actually tried.

Brain Toniq is organic, kosher, vegan, gluten-free and the rest of those en vogue modifiers that connote "consumption by the white man," whereas Nawgan is all science-y and comes off more like a supplement than a drink you'd choose based on the taste.

Nawgan is calorically "cheaper," at 25 calories a can versus Brain Toniq's 80-calorie payload.

But how do you feel? (To be spoken in your best therapist voice.)

Well, we feel just as dumb as we ever did.

But for our money, we'll side with science. A beverage as wholesome and tasty as Brain Toniq cannot possibly boost our inner wattage. No doubt it's good for us (OK, maybe not nutritious but certainly harmless), but if it was health we were after, we wouldn't have started down this road in the first place. Our style has always been damage now, repair with future riches later. And as Red Bull has repeatedly taught us, sometimes the payoff is worth slugging down a cold can of disgust.

It must be said, however, that while both product names are pun-ishingly pathetic -- or, in Brain Toniq's case, pathetIQ (get it?) -- Nawgan's alliterative cerebral nod is, well, dumb.