Holiday Cocktail Countdown #3: Xmas in December at the Crow's Nest

Like any red-blooded American, Gut Check uses liquid medication to cope with holiday stress. Not only does a good winter cocktail make it possible to tolerate family members, say, inquiring about your procreation plans, it helps keep you warm, too. From now until Christmas, we're calling upon local drink-slingers to suggest great cocktails to get you through the season. Some of them are holiday-themed, some traditional, some not so much, but they all share one common thread: delicious potency. 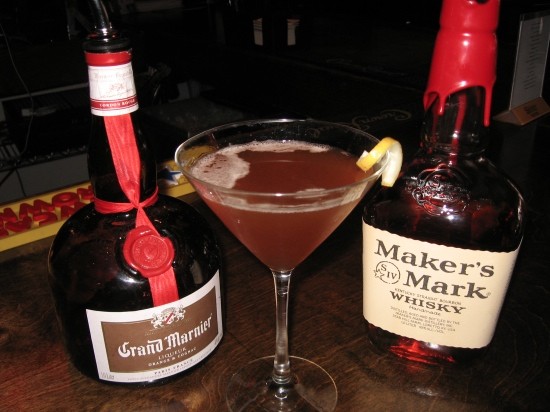 When we asked for a holiday cocktail, our bartender's response was part question, part warning.

"It's strong..." said Melissa Kingsbury. "Do you like whiskey?"

The stiff drink in question is an Xmas in December, a creation of Crow's Nest (7336 Manchester Road, Maplewood; 314-781-0989) owner Mike McLaughlin. "Some people think we're being ironic," quipped McLaughlin, when discussing its name.

After one or two sips of the blend of Maker's Mark, Grand Marnier and simple syrup, it's hard not to begin thinking of roaring fires, holiday shopping and, well, more Maker's Mark.

The drink is served chilled, in a large martini glass, garnished with a lemon twist. The experience of drinking Xmas in December starts with a little whiff of orange on the nose, followed by the warming bite of whiskey on the front of the palate. The finish has the lingering, smooth sweetness imparted by the Grand Marnier and simple syrup.