This past September the Schmitz family welcomed a new kid on their cozy, close-knit Clayton block -- Coastal Bistro and Bar (14 North Central Avenue; 314-932-7377). The Southern-inspired seafood bar and restaurant, featuring a combination of dishes from several coastal areas in the West, South, East and the Mediterranean, replaces Mosaic Bistro Market. Coastal becomes neighbors with siblings Frank and Ellen Schmitz's eateries Bocci Bar, which opened in the spring and BARcelona Tapas Restaurant.

Owner Frank Schmitz says they decided to make the switch to Coastal because of the confusion between Mosaic Bistro Market and his brother Claus' original and additional Mosaic locations, which featured separate menus. It took a mere five days to convert the restaurant over to the contemporary, classy-yet-casual setting that it is today.

"It wasn't that it wasn't busy or that it wasn't working. We just decided to add a different type of cuisine to the block -- something that wasn't available in the immediate vicinity," says Schmitz, who simultaneously co-owns and operates his three restaurants from a central office located on the second floor of Bocci Bar. Head chef David Molina oversees all three kitchens.

"Coastal's menu selection has the ability to change almost every week in order to use the freshest items available," says Schmitz.

Coastal Bistro and Bar's land and sea offerings, specializing in "cuisine from the coasts for the landlocked food lover," include lunch and dinner entrees, small plates for sharing, and a 30-foot long "raw bar" featuring fresh oysters served chilled with house-ade sauces and mignonettes, jumbo shrimp cocktail, crab claws, and oyster shooters with tequila or vodka and cocktail sauce -- a tradition on the lower east coast. Weekday happy hour takes place from 1 to 7 p.m. on weekdays with $1 oysters. 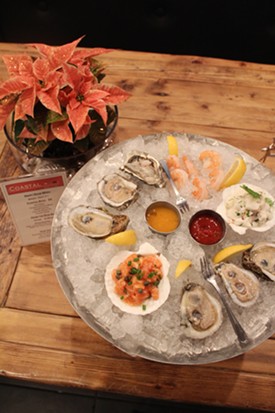 Schmitz recommends the raw seafood tasting tower ($35), featuring fresh shucked oysters, cold steamed shrimp, fresh ceviche, salmon tartare and more to get a sampling of all the day's seafood offerings. Chicken and dumplings and gumbo are among customer favorites, corresponding to the low-country cuisine aspect of Coastal's concept. Other current enticing menu standouts include New England lobster rolls, a lobster and clam bake with cornbread topping, and seafood stew.

Coastal Bistro and Bar is open Monday through Saturday from 11 a.m. to 10 p.m. Dine there before the end of the year and get $5 off of your order of $25 or more with Coastal's coupon, and check out any of Frank and Ellen Schmitz's restaurants for special holiday offerings, including a New Year's Eve five-course low-country menu and a New Year's Day brunch at Coastal Bistro and Bar. Stay tuned to Gut Check's Weekend Best Bets next week for more details.